After the longest shutdown in their history, the first set of telescopes at the Cheshire-based station are being switched on so they can once again contribute new and exciting data to the international science community 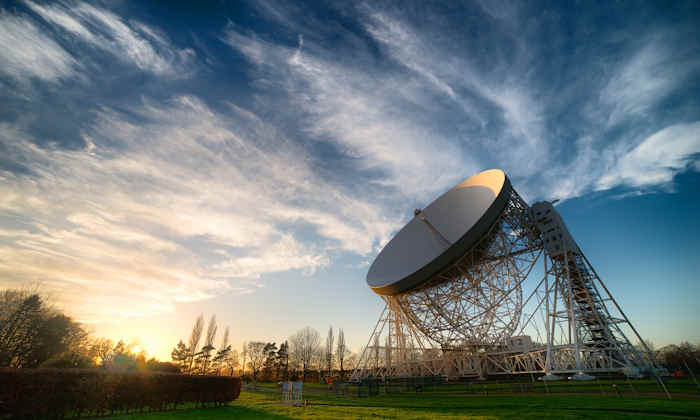 Projects that Jodrell is planning to rejoin this summer include a programme to determine the mystery of how planets are formed – and testing the theory that dust and gases create pebble-sized matter that somehow bond together to create a single planetary rock.

The Mark II radio telescope at Jodrell has already successfully re-joined the European VLBI Network (EVN), a partnership of radio telescopes located in Europe but also Asia and additional antennas in South Africa and Puerto Rico. The EVN performs very high angular resolution observations of cosmic radio sources – and the only network of its kind capable of real-time observations.

To the great relief of Jodrell staff, data from the Mark II telescope was transferred to the Netherlands, where they were successfully correlated against the other European telescopes, including the Yebes 40-metre telescope in Spain. “The data looks great – so this is a real milestone in getting Jodrell re-connected to our international community,” said Professor Mike Garrett, Director of the Jodrell Bank Centre for Astrophysics.

Also up-and-running, explained Professor Garrett, is the 42-foot dish that sits atop Jodrell’s main building and is busy monitoring the activities of pulsars.

“Getting Jodrell back into operation after such a long shutdown is a really positive signal to our team at Jodrell, the rest of the University and the international science community as a whole,” said Professor Garrett.

“In particular it’s a very reassuring message to our students and prospective students who look to Manchester because it’s all about discovering new knowledge. That is beginning to happen again.”

Professor Garett explained that getting Jodrell back to pre-lockdown status will be a complex and phased process, ensuring that staff and students are fully safeguarded all along the way. During the height of lockdown a community of 60 staff was reduced to a skeleton crew who were keeping an eye on the shuttered site.

“Safety is our number one consideration, so nothing can be rushed. We must be sure that research, technical staff and students are all safe – thankfully, much of our work can be done remotely,” explained Professor Garrett. He said that Jodrell scientists have continued much of their research at home accessing and analysing a swathe of legacy data using their laptops and linking up to Jodrell’s huge digital databases.

The next phase in Jodrell’s post-lockdown strategy is restarting the e-MERLIN programme, an array of seven radio telescopes spanning 217 km across the UK connected by a superfast optical fibre network with its headquarters at Jodrell – e-MERLIN has a unique position in the world with an angular resolution comparable to that of the Hubble Space Telescope.

Telescopes in the e-MERLIN array will be carefully activated one-by-one, with the nearest dishes to Jodrell switched on first.

As the summer progresses, work to complete the final stage of resurfacing on the giant Lovell telescope will resume and this should be done by the end of July. Work can then begin to make the Lovell telescope operational again and incorporated into e-MERLIN to work on the major legacy observing programmes.

One of these projects, said Professor Garrett, is studying how new planets form around stars - a phenomenon that is not fully understood.

Perhaps the biggest challenge to getting Jodrell fully operational has been restarting the ‘supercomputer at the heart’ of Jodrell’s scientific programmes because its amazing number-crunching capabilities make sense and correlate the vast amounts of data that the Manchester telescopes gather from the cosmos.

“This has now been turned on – we had all our fingers and toes crossed and so far it looks good. Of course, it still needs to be exercised with some real data but that will come,” added Professor Garrett.