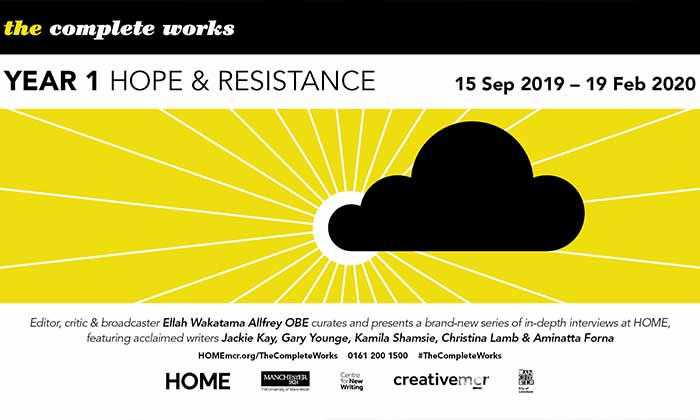 Editor, critic & broadcaster Ellah Wakatama Allfrey OBE presents the first in a brand-new annual series of in-depth interviews at HOME, in partnership with the Centre for New Writing and Creative Manchester at The University of Manchester. The series features some of our most exciting contemporary writers whose work embodies and has strong resonance with the powerful theme of Hope & Resistance.

Ellah Wakatama Allfrey OBE is a Senior Research Fellow at the University of Manchester’s Centre for New Writing. She is Editor at large at Canongate Books and was the founding Publishing Director of The Indigo Press. She is chair of the Caine Prize for African writing and she served on the judging panel of the 2017 Dublin International Literary Award and the 2015 Man Booker Prize. In 2011 she was awarded an OBE for services to the publishing industry, and earlier this month, she was appointed as an honorary fellow of the Royal Society of Literature.

Ellah explains: “The Complete Works is a unique opportunity to invite you to ‘slow down’ in our current environment of fast news via social media and instant reactions. Focusing on leading international writers, each conversation will dive deep into their imaginations and motivations, drawing on their complete body of work. Our conversations will take a fresh look at their work and the impact it’s had on how we understand the events of our time, the world we live in, our relationships and what it means to be human.”

20 January 2020: Aminatta Forna
Aminatta’s novels including Happiness and The Hired Man, have been translated into twenty two languages. Her essays have appeared in Freeman’s, Granta, The Guardian, LitHub, The Nation, The New York Review of Books, The Observer and Vogue. She has written stories for BBC radio and written and presented television documentaries including The Lost Libraries of Timbuktu (BBC Television, 2009) and Girl Rising (CNN, 2013).

19 February 2020:  Lindsey Hilsum
A trusted and familiar face as Channel 4 News International Editor, Lindsey Hilsum has reported on conflicts from around the world through her career – from Syria to Rwanda to Iraq. The author of two works of non-fiction, one on Libya and one the biography of fellow correspondent Marie Colvin, her work is carried out in times of crisis when the human condition is most laid bare. Bearing witness and bringing us news of our world and the lives lived within it.

15 September 2019: Jackie Kay
HOME Patron Jackie Kay is the National Poet for Scotland, Chancellor of the University of Salford and the award winning author and playwright of Red Dust Road and The Adoption Papers.

1 October 2019: Gary Younge
The award-winning author of five books including Another Day in the Death of America, broadcaster and columnist for The Guardian.

28 November 2019: Kamila Shamsie
The author of seven acclaimed novels including Home Fire, which was longlisted for the 2017 Man Booker Prize and won the 2018 Women’s Prize for fiction. Kamila is Senior Lecturer in Creative Writing at the Centre for New Writing and a Patron of The Manchester Literature Festival.

16 December 2019: Christina Lamb
One of Britain’s leading foreign correspondents and the author of eight books including I Am Malala and The Girl from Aleppo: Nujeen’s Escape from War to Freedom in a Wheelchair.