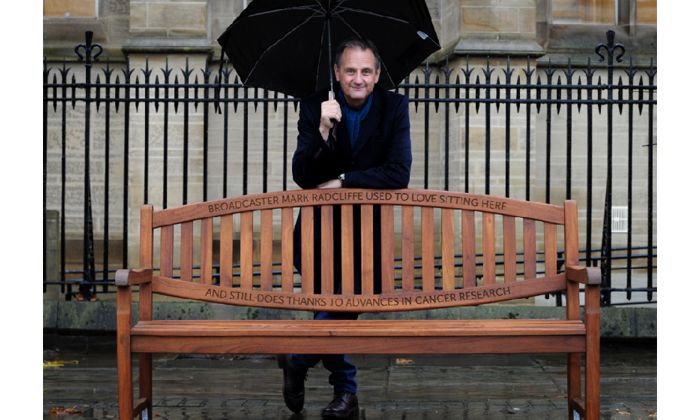 University of Manchester alumnus and radio broadcaster Mark Radcliffe has unveiled a bench situated on campus in his honour. Unlike traditional ‘in memoriam’ benches, Mark’s will attest to his recovery from cancer and pay tribute to the scientists, doctors and nurses who are working to tackle the disease. The bench inscription reads: “Mark Radcliffe loved sitting here….and still does thanks to advances in cancer research.”

The bench will launch the ‘Re-Write Cancer’ campaign – a joint fundraising appeal from Cancer Research UK, The Christie Charitable Fund and The University of Manchester which aims to fund a new £150m cancer research facility. The world-class facility - due to open in 2022 - will be in the same location, and twice the size, of the Paterson building which was extensively damaged by fire in 2017.

Mark, who studied English and American Studies at the University in the 1970s was diagnosed with cancer last year. Following his diagnosis, the cancerous tumour in his tongue – which had spread to the lymph nodes in his neck – was successfully  removed. He was able to return to his show on BBC Radio 2 in February of this year.

Mark said: “It’s an absolute honour to be involved in the Re-Write Cancer campaign. I loved my years studying at The University of Manchester, so it’s the perfect site for the bench.

“Facing a cancer diagnosis was extremely tough – it completely turned my life upside down and made me re-evaluate what really matters to me. But thousands of people are in the same boat every year and I was fortunate to receive excellent care at The Christie.”

President and Vice-Chancellor Professor Dame Nancy Rothwell said: “As an institution and research community we were all deeply saddened by the fire of 2017, but the scope and vision outlined for the new project is very exciting. It is matched only by our ambition to enhance Manchester’s reputation as a world-leading centre for cancer research.

“With our partners, Cancer Research UK and The Christie, we genuinely believe this facility will be at the epicentre of some of the world’s most important cancer-related innovations in diagnosis, treatments and clinical trials.

“Having such an esteemed alumnus as Mark, who has been so personally impacted by cancer, launch the fundraising campaign in such a unique way only adds to our excitement."