The moving ceremony was hosted at Australia House, London 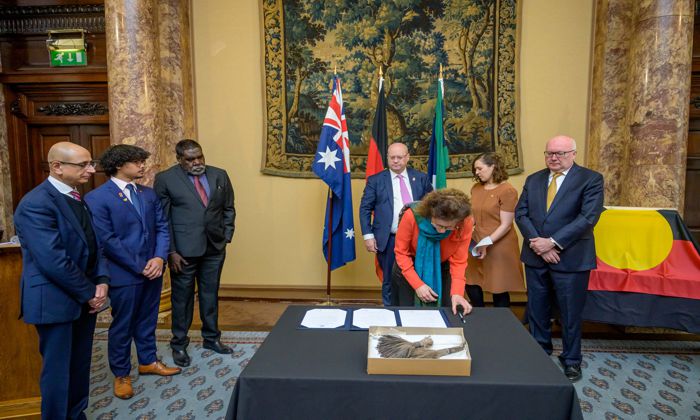 A delegation of Traditional Owners from the Gangalidda Garawa Nation and representatives from the Australian Institute of Aboriginal and Torres Strait Islander Studies (AIATSIS) attended a moving handover ceremony at Australia House, London. The handover ceremony signified the official return of 18 culturally significant items from the Manchester Museum to the Gangalidda Garawa people of the Queensland Gulf Country and the Nyamal people of the inland Pilbara, Western Australia.

Gangalidda and Garawa traditional owner Mangubadijarri Yanner hailed the significance of the occasion for his people and for reconciliation in Australia. “As a young Aboriginal person and as a proud Gangalidda man, this is, to me and my community, what true practical reconciliation looks like”, Mr Yanner said.

"I am honoured to have the opportunity to carry on the work of my ancestors by bringing our sacred cultural heritage items and artefacts back to country where they belong."

The handover ceremony follows the Manchester Museum’s announcement on 4 October 2019 that it would unconditionally return 43 items from its collection to four Aboriginal communities. A further handover ceremony for the Aranda people of Central Australia and the Yawuru people of the western Kimberley will be held in late February.

"It’s not just about the objects leaving, but about the relationships that are left behind”.

In attendance were the Hon George Brandis QC, High Commissioner to the United Kingdom, and Esme Ward, Director of Manchester Museum.

AIATSIS partnered with the Manchester Museum and the Gangalidda Garawa and Nyamal communities to research, identify and repatriate the material, which includes secret and sacred ceremonial items.

The delegation and the items will begin their voyage home to Australia on Saturday evening.

The AIATSIS-led Return of Cultural Heritage Project is funded by the Australian Government as part of the measures to mark the 250th anniversary in 2020 of James Cook’s first voyage to Australia.

The Australian Institute of Aboriginal and Torres Strait Islander Studies (AIATSIS) and the Manchester Museum have signed a Memorandum of Understanding (MOU) in Manchester. The MOU follows a successful partnership between the two organisations to return significant cultural heritage material to Aboriginal communities in Australia.

AIATSIS CEO Craig Ritchie welcomed the formal agreement, saying: “We are both committed to promoting greater understanding between cultures and ensuring Aboriginal and Torres Strait Islander culture is respected, valued and celebrated.”

Esme Ward, Director of Manchester Museum, sees the return and the MOU as a way to further the Museum’s goal to become a more inclusive, caring and relevant institution to the communities it serves both locally and globally.

Professor Nalin Thakkar, Vice-President for Social Responsibility, was delighted to sign the MOU. “At The University of Manchester we produce graduates who are skilled and knowledgeable, and can exercise important ethical, social and environmental responsibilities”, Professor Thakkar said.

AIATSIS and the Manchester Museum have extensive yet complimentary collections and strategic goals to preserve and make their collections accessible. This partnership aims to create collaborations for both organisations to share knowledge on best practice for the display and treatment of Aboriginal and Torres Strait Islander collections. The MOU will also facilitate exchanges on protocols and standards around the acquisition, management and access to collections relating to Aboriginal and Torres Strait Islander peoples and communities.

This latest MOU with The University of Manchester reinforces AIATSIS’ intent to build diverse and enduring relationships internationally, following on from MOU’s signed with the Museum of New Zealand Te Papa Tongarewa in 2019, the Smithsonian National Museum of the American Indian in 2017 and with King’s College (London) and Oxford University’s Pitt Rivers Museum in 2016.