Alan Turing will be face of new £50 note

Honour for mathematician and computer scientist, dubbed 'the father of modern computing', who worked with British intelligence to help break the German Enigma Machine 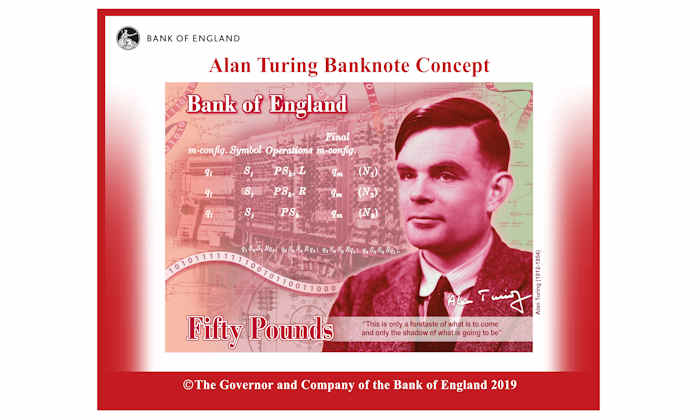 Alan Turing will be the next face on the £50 note the Bank of England Governor, Mark Carney, announced today (Monday, 15 July).

Making the announcement at the Science and Industry Museum in Manchester, the Governor also revealed the imagery depicting Alan Turing and his work that will be used for the reverse of the note.

The eminent mathematician and computer scientist, who is often dubbed ‘the father of modern computing’, was based at The University of Manchester after World War II. During the War he famously worked with the British Intelligence at Bletchley Park Service to help break the German Enigma machine.

In 1948 Turing was appointed Reader in the Mathematics Department at the then Victoria University of Manchester. Soon afterwards he became Deputy Director of the Computing Laboratory where he proposed an experiment now known as the Turing Test and worked on software for one of the earliest true computers - the Manchester Ferranti Mark 1.

However despite his remarkable achievements, as a gay man Turing was prosecuted for gross indecency in 1952, at a time when homosexuality was illegal in the United Kingdom. An inquest concluded his death from cyanide poisoning two years later was suicide. After a long-fought campaign, he was posthumously pardoned by HM The Queen in 2013.

Among those who led the fight for Turing's name to be cleared was Liberal Democrat peer Lord Sharkey, who says the new £50 notes will "serve as a reminder of the effects of bigotry and ignorance".

Turing’s legacy is still keenly felt at the University today, where he is one of our Heritage Heroes and has a building named after him which houses the Schools of Mathematics and Physics and Astronomy.

President and Vice-Chancellor, Professor Dame Nancy Rothwell said:  “We’re thrilled and immensely proud at the news Alan Turing will feature on the £50 note as he is such a strong part of our institution’s rich heritage.

“His pioneering work in mathematics, computing and artificial intelligence helped to distinguish and enhance our reputation in these academic areas, something that continues to this day.

“Here at the University Turing’s legacy lives on as future generations of mathematicians and physicists study in a building that bears his name. This latest recognition is richly deserved and a fitting tribute to one of the greatest scientists of the 20th Century.”

Alan Turing was chosen following the Bank’s character selection process including advice from scientific experts. In 2018, the Banknote Character Advisory Committee chose to celebrate the field of science on the £50 note and this was followed by a six week public nomination period. The Bank received a total of 227,299 nominations, covering 989 eligible characters.

The Committee considered all the nominations before deciding on a shortlist of 12 options, which were put to the Governor for him to make the final decision. This latest accolade follows Turing being voted the 20th century’s greatest person in a public vote on BBC Two’s series, ICONS earlier this year.

Mark Carney, Governor of the Bank of England, commented: “Alan Turing was an outstanding mathematician whose work has had an enormous impact on how we live today. As the father of computer science and artificial intelligence, as well as war hero, Alan Turing’s contributions were far ranging and path breaking. Turing is a giant on whose shoulders so many now stand.”

The full note design including all the security features will be unveiled closer to it entering circulation.