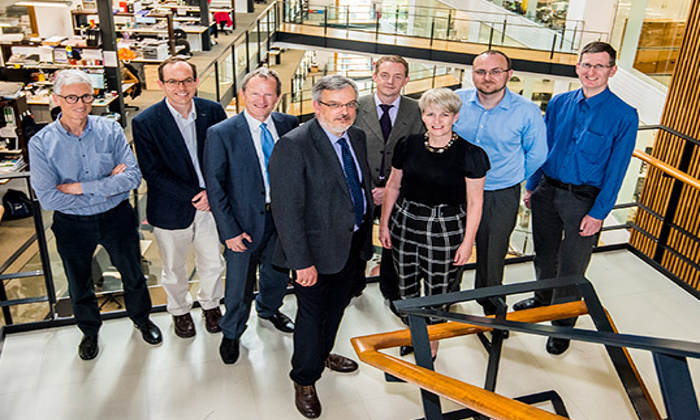 Based at the Manchester Institute of Biotechnology (MIB) on The University of Manchester's North Campus, the new Future Biomanufacturing Research Hub is backed by £10 million in government investment to develop new technologies in order to transform the manufacturing processes of chemicals by using plants, algae, fungi, marine life and micro-organisms.

This groundbreaking work to drive clean growth meant the MIB was the ideal venue for the UK Trade Secretary Greg Clark and Greater Manchester Mayor Andy Burnham to jointly launch the Local Industry Strategy that will steer the city-region's future economic development.

This strategy unveils Greater Manchester's ambition to become the UK's first city-region to achieve carbon neutral living by 2038, as well as plans to further develop the area's leading position in the manufacturing of advanced materials such as graphene, health innovation and digital and creative sectors that have fuelled growth in the region.

Mr Clark said the new facility will put the city-region at the forefront of exciting new developments to drive clean growth and was "a prime example of our modern Industrial Strategy in action".

"With the Manchester Institute of Biotechnology, the University already has world-leading facilities and capabilities in bio-based chemicals synthesis and manufacture. The addition of the Future Biomanufacturing Research Hub, which is being launched as part of the Greater Manchester Local Industry Strategy, will take that expertise to an even higher level." - President and Vice-Chancellor, Professor Dame Nancy Rothwell

And following the Local Industrial Strategy launch, the MIB hosted a national two-day conference to mark the project launch of the hub and looked to build a collaborative vision for the UK's fast-growing biomanufacturing sector.

The conference was attended by leading academics and business leaders, plus regional and national policymakers to help map out a shared pathway to a bio-based economy. Those attending represented partner universities and organisations, as well as global brands such as Shell, GSK, Unilever and BP.

Delegates were told how the new hub will draw on national expertise to focus on innovations in pharmaceuticals, value-added chemicals, engineering materials and biofuels.