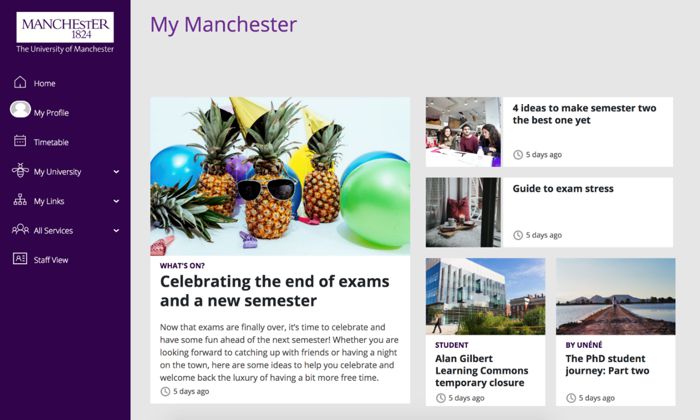 We are committed to transforming our University’s digital services over the coming years, enabling us to deliver the type of world-class digital experience that meets the increased expectations of today’s students and staff.

To start this transformation, on Monday, 4 March we will be launching a beta version of the new My Manchester.

The new My Manchester delivers significant improvements including increased reliability, a vastly improved user interface, and the ability to deliver personalised content and services for all users, including current students, staff and offer holders.

The most important and exciting aspect of the new My Manchester is that it gives us a platform through which we can develop and deliver continual enhancements to our digital services for all types of users. We already have a huge number of these on our digital roadmap, including outputs from the Student Lifecycle Project.

What is the My Manchester beta and when will it launch?

The current version of My Manchester will continue to operate in exactly the same way for the duration of the beta and students will be able to access all of their existing services.

What is being released?

As well as an improved user interface and increased personalisation, there are enhancements to student timetables, the launch of a new ‘My Profile’ area for students to update their personal details and see their financial account and improved visibility of their library account.

Most significantly, this release is a complete overhaul of the technology behind My Manchester that will enable the rapid development and deployment of new features and services – beginning with the services that have been designed and built as part of the Student Lifecycle Project.

How will students be invited to the beta test?

When the beta version launches on Monday 4 March, students will see a link to it on the current version of My Manchester. Targeted communications will be sent to different groups of students throughout the beta release to invite them to use the beta site, if they haven’t already.

How are we capturing feedback?

During the beta release we’ll use specialist on-page software to gather feedback on bugs and defects directly from users, as well as suggestions for improvements.

What do I need to do?

What happens after the beta test?

The beta test allows us to fine tune the first set of changes and iron out any bugs or defects. Once this has been completed and the launch of the new My Manchester is confirmed further communications will be shared.

Beyond this, a number of additional features and services have already been developed and are planned to launch as part of the implementation of the Student Lifecycle Project, including dashboards for academic colleagues, digitisation of a number of student services, and the extension of My Manchester to offer holders.