Baroness Hughes returns to the University in her new role. 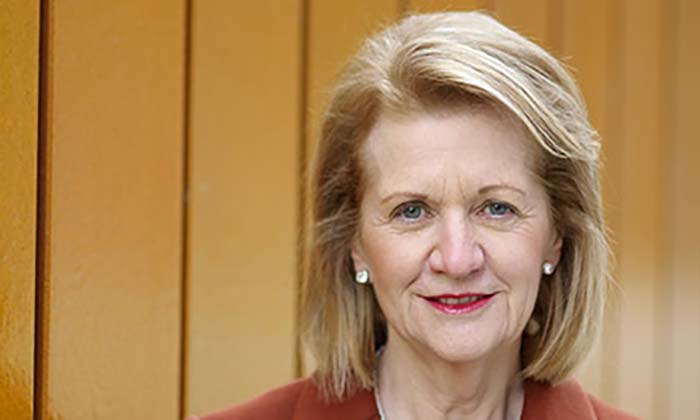 Baroness Beverley Hughes, Greater Manchester’s Deputy Mayor for Policing, Crime, Criminal Justice and Fire, has joined the School of Social Sciences (SoSS) in the role of Honorary Professor of Politics.

In her appointed role as Deputy Mayor, Baroness Hughes is responsible for making the police and fire services accountable to local people, and consulting with them on their priorities for community safety in Greater Manchester.

Prior to becoming the Member of Parliament for Stretford and Urmston, a position she held from 1997 to 2010, Baroness Hughes worked in the Faculty of Humanities and we are delighted to welcome her back in her new role.

Baroness Hughes said: “It is a pleasure to return to the University as an Honorary Professor in Politics. I had many happy years working for the University, leading the Department of Social Policy in the old Faculty of Humanities before becoming an MP.

“The dialogue between academic research and practical politics is something I have always valued. I’m glad to have the opportunity to meet Politics staff and hear of the latest research around issues facing Greater Manchester citizens and to share something of what it means to hold political office with the next generation of politics students.”

Baroness Hughes has a strong connection with both the Faculty and University, graduating from the University with a BSc in Social Science. She then continued her studies here, carrying out postgraduate research into the care of people with schizophrenia, for which she was awarded a Master of Science degree.

Francesca Gains, Professor of Public Policy in the School of Social Sciences said: “Baroness Hughes is one of the most eminent Politicians in British politics today with huge experience of how government and Parliament works. She can offer our students unparalleled insights into the practical world of doing politics, of how policy making in the real world really works and especially of how to achieve greater diversity in political representation.

“These are all features of political life our students study and are concerned about.  It’s a great opportunity for our students to have Baroness Hughes contribute to the extra curricula activities we offer students and in making an input into our policy making curriculum”.

Professor David Richards, Head of the Politics Department, SoSS, added: “I am delighted to welcome [back] to the University, Baroness Hughes as an Honorary Professor in the Department of Politics.  The breadth of her political experience and quality of contribution to both politics and society will not only be a major asset to us all in terms of teaching and research both within the Department and the School of Social Sciences, but also brings an additional dimension in terms of further bridging the gap in public engagement and outreach. We very much looking forward to working with her.”