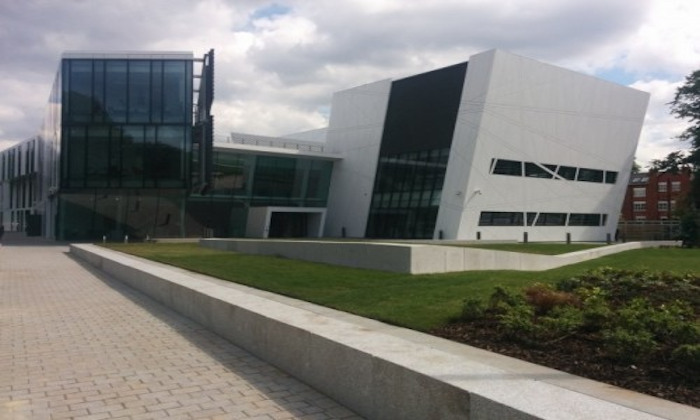 The University of Manchester building for Manchester Cancer Research Centre (MCRC) researchers has been renamed in a ceremony to honour the contribution of Michael Oglesby, his family, and the Oglesby Charitable Trust to cancer research in Manchester.

Michael has been the chair of the MCRC steering board for 12 years and has played a major role in the growth of cancer research in Manchester during that time. It is in recognition of this role that the building will now be known as the Oglesby Cancer Research Building.

The building for MCRC researchers opposite The Christie, opened in 2015 and houses 150 scientists and 100 academic and support staff. The MCRC is an internationally renowned and hugely successful partnership between The Christie, The University of Manchester and Cancer Research UK. The naming ceremony took place on 20 November.

Professor Nic Jones, Inaugural Director of the MCRC, said: “This building means an awful lot to me and I am so thrilled that from now on it will be named in Michael’s honour. He was instrumental in getting the project off the ground and in guiding its development through the inevitable ups and downs.

“His tireless support for the Centre and its ambitions has been there right from the start. We started on that journey together not really knowing how far it would take us and sharing that journey has been so inspiring.”

Professor Rob Bristow, MCRC Director, said: “I came to Manchester last year because I saw a unique opportunity. Much of that was down the ethos of collaboration that this building represents, and the ambition shown by Michael and the rest of the MCRC leadership. It is fantastic that we can honour him in this way.”

Michael holds an honorary doctorate from the University, is one of its most generous donors and has made huge contributions in money, time and influence to the University and beyond.

Michael, who was joined by his family said: “We are very proud to have the Oglesby name associated with this building, which is a landmark building in the city. It makes a statement to the rest of the world about Manchester’s success and ambition in cancer research.

"But most importantly it tells patients that their first class treatment has cutting edge science behind it, which in turn gives them hope, and that is priceless.”

The Oglesby Charitable Trust has supported many initiatives and projects across the University, but with a considerable focus on cancer. The Trust made a lead gift to the MCRC building and a further gift to the Centre for Cancer Biomarkers. Michael’s visionary philanthropy has also led to establishing a translational patient-centred research group to investigate an unusual type of chronic leukaemia (CMML).

Michael is also playing a leading role in the development of plans for a new world-class cancer research facility which is to be built at The Christie on the site of the Paterson building which suffered devastating fire damage in April 2017 displacing over 300 scientists and support staff.

Located across the road from the Oglesby Cancer Research Building, it will be a major step forward in realising the MCRC’s ambition of becoming one of the world’s top five centres for basic, translational and clinical cancer research.

Professor Dame Nancy Rothwell, President and Vice-Chancellor, said: “Virtually wherever you walk across our campus, if you look closely enough, you’ll find evidence of quite what an impact the Oglesby family has had on the University across a wide range of fields of endeavour. However, the area that Michael’s enthusiasm, commitment and insight has had the greatest impact is cancer research, which makes this naming so appropriate.”