The Chinese engineering group CETC (China Electronics Technology Corporation) has entered into a collaboration agreement with the University of Manchester’s School of Physics & Astronomy, and School of Electronic & Electrical Engineering 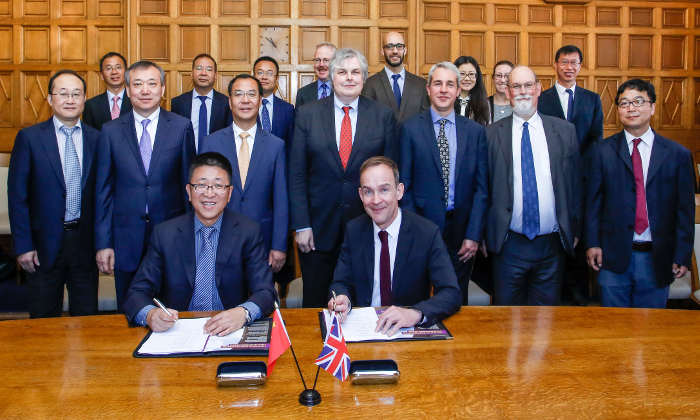 The Chinese engineering group CETC (China Electronics Technology Corporation) has entered into a collaboration agreement with the University of Manchester’s School of Physics & Astronomy, and School of Electronic & Electrical Engineering (EEE) – the agreement focuses on research and development of technologies relating to radio astronomy.

This agreement paves the way for the formation of a new joint research laboratory for Radio Astronomy Advanced Instrumentation Research (RAAIR).

CETC’s multi-million investment in RAAIR over the next three years will fund state-of-the-art scientific and technical research projects, researchers and international exchanges with the aim of fostering a long-term relationship with the University.

Professor Tony Brown, of the Microwave and Communication Systems Group (School of EEE) was the original driving force behind the new collaboration. The Director of the new RAAIR laboratory is Professor Michael Garrett, Director of the Jodrell Bank Centre for Astrophysics (JBCA) and Sir Bernard Lovell chair of astrophysics. The initiative builds on over seven decades of continuous world-leading radio astronomy technology development at Jodrell Bank.

Professor Michael Garrett says:  “We are extremely excited about RAAIR and the collaboration with CETC Institute 38. We look forward to jointly developing technologies that will have a major impact on next generation radio telescope projects, including the Square Kilometre Array (SKA)”.

Professor Tony Brown says: “I am delighted we have formed this joint research institute .We first visited CETC 38 in 2013 and have been working together since then on technology for the Square Kilometre Array (SKA). The RAAIR moves our collaboration to a new level and will delivery world leading research in advanced technology for radio astronomy.”

At a signing ceremony on Monday 21 May, Vice-President and Dean of the Faculty of Science & Engineering, Professor Martin Schröder welcomed CETC President Mr. Liehong Liu, CETC Institute 38 President Mr. Xinping Chen and a delegation of 10 senior leaders to the University.

Professor Schröder spoke strongly of the University of Manchester’s commitment to closer relations with Chinese science and engineering, and the benefits that have already resulted from this.

On behalf of the University of Manchester, Professor Sean Freeman (Head of School, Physics & Astronomy) co-signed the RAAIR collaboration agreement alongside Mr. Xingpin Chen, marking the beginning of this international collaboration.

The collaboration is the result of months of close cooperation and negotiation between CETC, lead academics from the Faculty of Science & Engineering, the University’s Business Engagement Support and Contract Team.