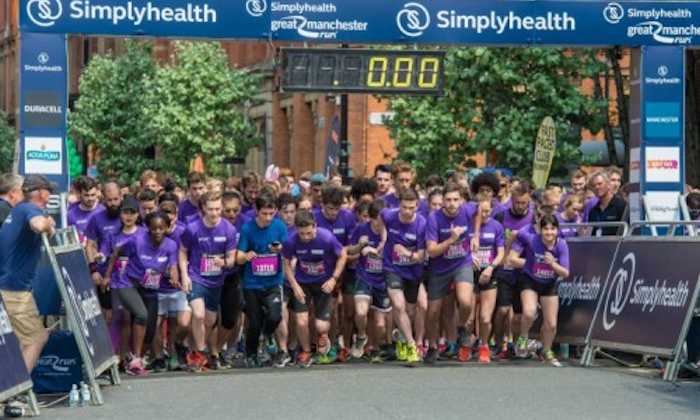 The 2,300 University staff, students and alumni who took part in last weekend's SimplyHealth Great Manchester Run have so far raised over £28,000 for worthy causes.

The runners donned the University’s purple shirt to complete the 10k race around Central Manchester, which is Europe’s largest. The University had its own start time, with a Purple Wave of runners wearing the technical running t-shirts they receive on registration. Of the £28,000 raised so far, £15,000 was for the University’s Undergraduate Access Scholarship Programme.

The scheme support’s bright young people who come from the most deprived parts of Greater Manchester.

Congratulations to The University of Manchester's fastest finishers:

The internationally renowned 10k run was  staged for the 16th time, with the day also including a half marathon in the heart of the city. In the build up to the race, University organisers enlisted the help of athletics legend Mo Farah who in March recorded a video urging staff, students and alumni to sign up for the run.

Among the runners was Cardy Camara, who took  part despite suffering from debilitating arthritis in her feet. Cardy was also running in memory of her brother Gerry Law, who died of pancreatic cancer in January this year. The 50-year-old is in constant pain when she trains. “OA is very painful and I have it in my hands too. The doctors first thought I’d fractured a bone in my foot it was so bad. But running so important to me.”

University Sport Participation Manager James Marenghi said: “This year’s Purple Wave was a tremendous success; we were so pleased to be part of the Great Manchester Run; it was thrilling to see our Purple Wave leaving on the start line. Our runners had a fantastic time and we are delighted to have raised so much cash for so many important causes, including the University’s brilliant undergraduate access programme. It’s clear the project has inspired our students, staff and alumni to get into sport participation and look after their physical and mental health. The money is still coming in so thanks to all those people who gave so generously."

He added: “There’s no doubt that our University of Manchester runners played a huge part in making this fabulous event even better than last year. I’d like to thank everyone who took part, and helped make the day so special. We’ll definitely be back in 2019!”