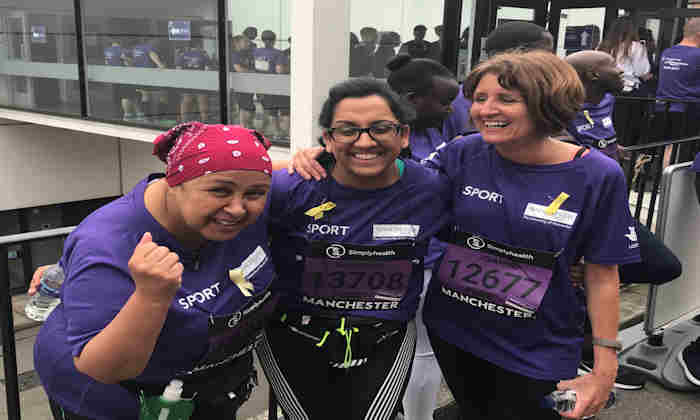 Cardy Camara, who works for Well North, is to join the 2,200 staff, students and alumni who have registered with the University to take part in the 10k race, while suffering from debilitating arthritis in her feet.

She will also be taking part in memory of her brother Jerry Law, who died of pancreatic cancer in January this year.

The 10k run  - the nation's most popular - takes place on the streets of Central Manchester.

The University will have its own start time, with runners - and run/walkers like Cardy - wearing the purple technical running t-shirts they receive on registration.

“One of my colleagues signed up to the purple wave two years ago. She had never run before and she inspired me to run the 10k with her,” she said.

“While I was training my feet started hurting - but I put it down to the running, though was later diagnosed with osteoarthritis. So running is very painful,” she said.

The 59-year-old is in constant pain when she trains. “OA is very painful and I have OA in my hands too. The doctors first thought I’d fractured a bone in my foot it was so bad.

When a note was sent to her about the University's lunchtime strollers - a walking group for students, staff and the public- she thought she’d give it a go again.

The group has helped her realise her dream of taking part in the Purple Wave for a second time.

But there will also be a note of sadness to the day.

She said: “My brother Gerry was taken from me much too early. He was a documentary film cameraman and had worked with many famous people including Eric Cantona and Ewan McGregor. But he was most interested in documenting the lives of ordinary people.

“He was diagnosed with pancreatic cancer in the summer of 2016, had surgery in October and lost his battle with the disease in Jan 2017.

“He was a keen cyclist - such a fit man and was so pleased about my running.”

“Last summer I ran the 10k in his memory to raise money for the Maggie’s charity near the Christie Hospital which provides an incredible sanctuary for people, affected by cancer. This year I am hoping to raise money for Maggie’s Manchester and Pancreatic Cancer Action.

“I am also a trained mindfulness practitioner and have given a session to patients and relatives at Maggie’s.”

She added: “Running is still very important to me: it helps me clear my head and gives me the opportunity to be mindful.

“It is my special time with for me and I have great memories of my brother and will of course be thinking about him and I’m looking forward to what will be a be a lovely experience.

“The more I can raise awareness about pancreatic cancer the better.”

Pictured: Cardy (left) with friends who inspired her to take part