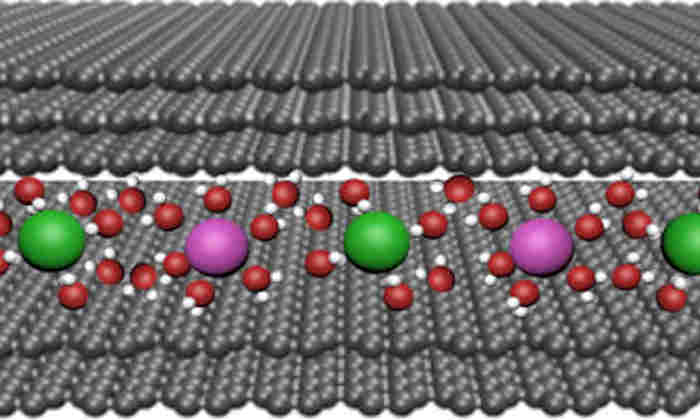 Researchers at the National Graphene Institute (NGI)  have succeeded in fabricating tiny slits in a new membrane that are just several angstroms (0.1nm) in size. This has allowed the study of how various ions pass through these tiny holes.

The slits are made from graphene, hexagonal boron nitride (hBN) and molybdenum disulphide (MoS2) and, surprisingly, allow ions with diameters larger than the size of the slit to permeate through. The size-exclusion studies allow for a better understanding of how similar scale biological filters such as aquaporins work and so will help in the development of high-flux filters for water desalination and related technologies.

For scientists interested in the behaviour of fluids and their filtration, it has been an ultimate but seemingly distant goal to controllably fabricate capillaries with dimensions approaching the size of small ions and individual water molecules.

The researchers made their slit devices from two 100-nm thick crystal slabs of graphite measuring several microns across that they obtained by shaving off bulk graphite crystals. They then placed rectangular-shaped pieces of 2D atomic crystals of bilayer graphene and monolayer MoS2 at each edge of one of the graphite crystal slabs before placing another slab on top of the first. This produces a gap between the slabs that has a height equal to the spacers’ thickness.

“It’s like taking a book, placing two matchsticks on each of its edges and then putting another book on top.” explains Geim. “This creates a gap between the books’ surfaces with the height of the gap being equal to the matches’ thickness. In our case, the books are the atomically flat graphite crystals and the matchsticks the graphene or MoS2 monolayers.”

The new research as published in Science, shows that these newly observed mechanisms plays a key role for desalination using the size exclusion and is a key step to creating high-flux water desalination membranes.