"We are Manchester and this is Manchester University and we will not be turned by hate." 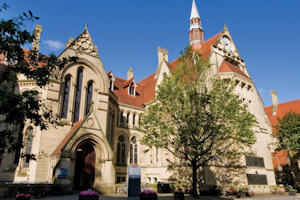 The University marked its Foundation Day 2017 by celebrating its commitment to social responsibility.

This year our prestigious Foundation Lecture was given by our graduate Gulwali Passarlay, who at the age of 12 took the perilous journey from Afghanistan to Britain seeking asylum.

Recalling his heartbreaking, but ultimately inspiring story, he told the congregation: "When I was doing the Manchester Access Programme I truly felt - this was my family, this was my home."

Nazir, the Chief Crown Prosecutor of the Crown Prosecution Service for North West England from 2011–15, who led the prosecutions of the Rochdale sex trafficking gang, summed up the spirit of the proceedings by recalling the city’s cohesive and resilient response to the Manchester Arena bombing earlier this year.

"We are Manchester and this is Manchester University and we will not be turned by hate."

You can watch the celebrations in our film: