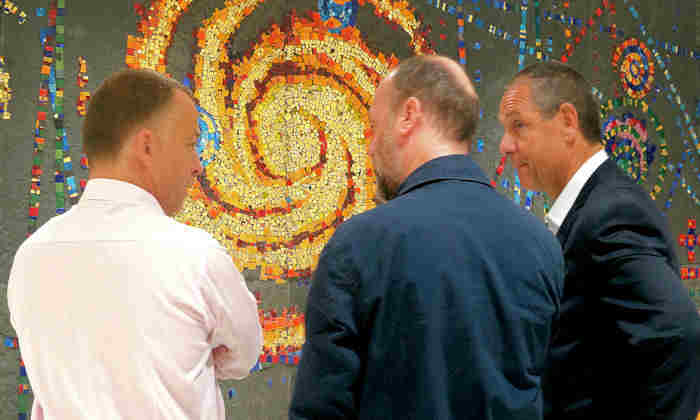 John says: “A Sixties photographer called John D Green was chosen by the architect – however it’s a mystery why he was commissioned.

“I’ve tried to find out more, and it would seem John D Green was a man of many talents – he was also a regular racing driver at Brands Hatch, and author of the legendary book Birds of Britain, recently the subject of an exhibition at Snap Galleries in London.”

Director of the Mosaic Restoration Company Gary Bricknell, who was tasked with overseeing the removal and restoration project adds: “It would seem he was the Austin Powers of his time!”

John continues: “The mosaic is of significant importance to the School of Physics and Astronomy and its retention and relocation has, to say the least, been a challenge.”

The mosaic, made up of a mix of Venetian, vitreous glass and unglazed ceramic tesserae mounted to riven flagstone and slate slabs, remained on site during the works.

The project took 2 full weeks to carry out and a further 2 weeks off site to manufacture the bespoke wall fixing and mounting system.

It was a meticulous process, with Gary’s experienced team having to carefully remove the tesserae between the slabs, removal of the slabs from the brick backing wall, providing a new metal wall fixing and mounting system, then installing on site. The mosaic tesserae were reinstated and the mural cleaned.

Assistant Director of Estates and Head of Capital Projects Steve Jordan said: “As part of refurbishments, a connection has been designed between two buildings, the Schuster Building annexe.

“This meant that the mosaic had to be moved and it’s the right thing to do.  We think the new location is much better and shows the mosaic off to its full potential.”

The mosaic was officially unveiled in its new location on Friday, 14 July.  It can be viewed near the lifts on the ground floor of the Schuster building.

This work is part of the University’s ten year Campus Masterplan to create a world-class estate for staff, students and visitors.