Giving a voice to the oppressed

Zimbabwean playwright and anti-Mugabe activist Silvanos Mudzvova, here at The University of Manchester on an Artist Protection Fund fellowship from the Institute of International Education, talks about his terrifying struggle for freedom. 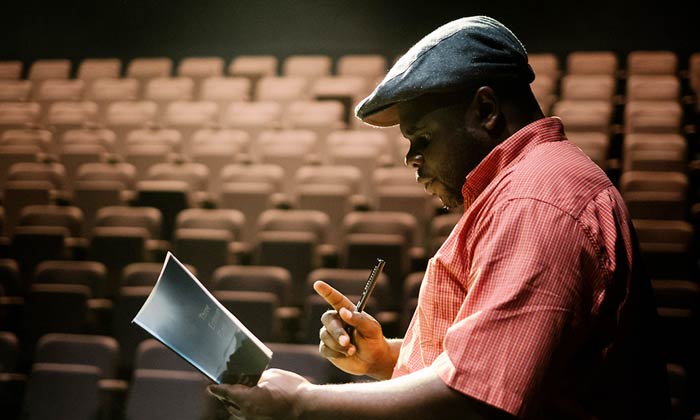 Silvanos Mudzvova smiles and warmly shakes my hand. His joy immediately fills the room; he seems genuinely pleased to be here in Manchester.

Only when he walks do I notice he’s limping. Later he shows me a dent in his skull. These are the scars of his abduction and torture by security forces back home in Zimbabwe; the physical evidence of a frightening struggle for freedom that he refuses to abandon.

The 39-year-old playwright has spent years writing and performing plays to draw attention to the injustices of Robert Mugabe’s regime. He’s lost count of the number of times he’s been arrested.

But his abduction in September was different. It occurred after a performance outside the Zimbabwean Parliament when he called for arrests over the misuse of $15 billion of the country’s diamond revenue.

He remembers what happened: “As they beat down the door, I got my wife and children into a bedroom and went out with my hands up. They put a sack over me and drove me to a remote lake notorious for disappearances.

“They beat me continuously, gave electric shocks to my feet and genitals, and asked questions about where I had got my money. It went on for three hours, they were so angry.

“Then suddenly they started getting phone calls telling them to stop – it was breaking news on the BBC, CNN and social media. Then I knew they weren’t going to kill me.”

He was eventually saved when a group of fishermen from the lake approached and started shouting about what was happening. His abductors knew their faces would be seen.

“Before they left, they injected me with something,” he says. “I still don’t know what it was or what it will do. I could hear but I couldn’t see or move. The fishermen got to me and took me to hospital.”

Silvanos underwent several operations – including one to repair his stomach, which had been stamped on – and remained in hospital for four weeks, part-paralysed and unsure whether he would ever walk again.

Until then, his first arrest had been the worst, when riot police stormed a theatre during a performance and arrested him onstage. The play was about Mugabe being stuck in a lift with the opposition leader, the two forced together to resolve Zimbabwe’s challenges.

“I was put in leg irons and handcuffs and charged with treason, which has a minimum of 20 years in prison. I was so full of fear,” he recalls.

Terror turned to farce as he was then forced to perform the play 12 times in 72 hours, for higher and higher ranking officers, none of whom could understand it.

When it went to court, the judge decided treason meant overthrowing the government rather than performing a play and Silvanos was released. “I went to the theatre that night and we did a three-week run – everyone wanted to see it,” he smiles.

Silvanos was awarded an Artist Protection Fund fellowship in 2016, which has placed him at The University of Manchester. Silvanos, having seen our Martin Harris Centre theatre spaces online, was thrilled with his placement.

Sponsored by The Andrew W. Mellon Foundation, the Artist Protection Fund awards fellowship grants to threatened artists and places them at host universities and arts centres in safe countries where they can continue their work.

He’s working closely with our students – speaking at their lectures, producing a play with them, having them take part in ‘read throughs’ of his new work and even judging the Drama Society’s Manchester In-Fringe Theatre Awards.

He’s also producing other plays, giving talks and working with community-based theatre groups and artists around the city.

“Silvanos embodies the historical role of Drama at the University – it has led on this agenda of applied, social theatre,” says Stephen Bottoms, Professor of Contemporary Theatre and Performance.

“In Place of War is a support system and creative organisation working with artistic communities in places of conflict. It works with over 100 grassroots organisations, in Africa, Europe, the Middle East, Asia and Latin America. Our Theatre in Prison and Probation project creates arts projects in criminal justice settings and for the long-term unemployed. My work has included work with UK communities affected by flooding. We do pure theatre, of course, but we are also nationally recognised as the UK originators of social, applied theatre.

“Art is very powerful and Silvanos is driven to write and perform. He’s also a very gentle, funny and utterly charming man. We could all learn a lot from him.”

In return, Silvanos will further hone his craft: “What I am learning at the University will increase my understanding of theatre and its different forms. The school is so advanced in terms of the technical side so I will spend a lot of time learning how to include this in my future performances.”

The theatre has always made Silvanos happy. As a child he would sneak into performances and sit on the floor in his school uniform. At 17 he took a lead role at the same theatre.

He travelled to England on a scholarship at the Royal Central School of Speech and Drama, but his stay in London was cut short when the Mugabe regime’s corruption affected his family.

His mother, a vegetable vendor, was the target of extortion, and so Silvanos returned home to form an organisation to express the pain and outrage felt on the streets. He remains defiant: “Art is not a luxury when you are living in a community where these things are happening.”

He is still motivated by his three children. Since the abduction, he has seen them twice, and then only for a few minutes for their own safety.

“I left my family without saying goodbye. That is one of the most painful things,” he reflects.

“I have not had the good life I wanted, but I can do this for my children. They don’t have a bright future in front of them if we keep quiet.”