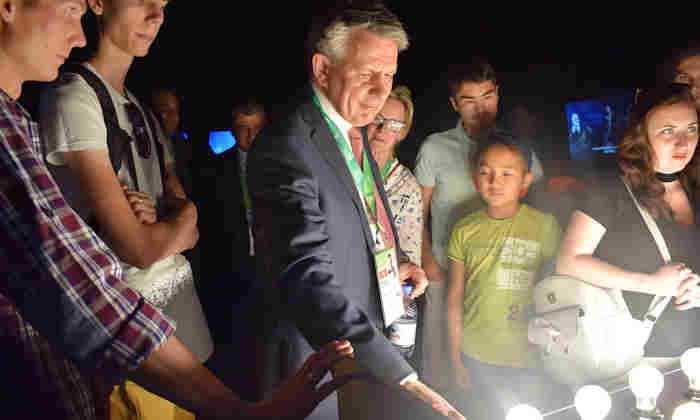 Ben van Beurden, CEO of Royal Dutch Shell, was updated on advanced material graphene and how its development is being led by The University of Manchester at an international showcase.

The leader of the global energy and petrochemical giant was visiting the UK Pavilion at EXPO 2017 in Astana, Kazakhstan.

As part of a formal tour led by Charles Hendry, Commissioner of the UK Pavilion, Mr van Beurden was introduced to great British innovation - with the centrepiece being graphene, the world’s first 2D material which was isolated in Manchester.

“Mr van Beurden was clearly impressed with this new technology and how it was first isolated in Manchester,” said James Tallentire, who is part of The University of Manchester delegation supporting the UK Pavilion.

“The visiting VIP Shell team was also very interested in Manchester’s role in developing graphene and the potential applications of graphene in the energy sector.”

The graphene element of the UK visitor experience at Astana is proving a huge hit, with applications such as the graphene light bulb on public display. The display is viewed by thousands of visitors every day.

The Manchester contribution to the UK’s innovation story has attracted regional interest – and Professor Ian Cotton, leader of The University of Manchester, was interviewed during a press conference by Kazakh press and broadcast media.

The Manchester delegation has made links with a range businesses and educational organisations   from the region and beyond.