Congratulations to everyone who took part in the Great Manchester Run!

Our #PurpleWave of more than 2,400 staff, students and alumni completed the 10k race on an emotional day in Manchester 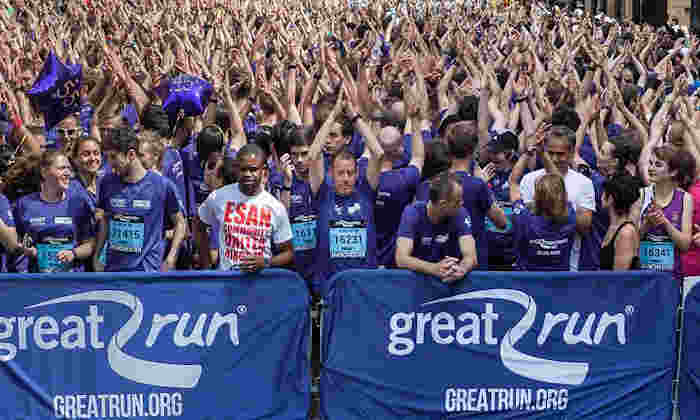 On Sunday, 28 May our runners set off, many with personal goals on what they wanted to achieve or by raising money for charities, as part of the largest ever university group to take part in an organised running event.

With cloudy conditions, it was an emotional day, following the shocking events at Manchester Arena earlier in the week.

First over the line among the women runners was Anne Kenchington in a time of 36.20 and the fastest man was Christopher Thomas in 34.38.

As well as everyone that took part, SPORT Manchester would also like to thank the volunteers who gave up their time to help out, cheer people along - and thanks to everyone who donated to many of the charities and causes that will benefit, including our own Equity and Merit Scholarships.

Vicky Foster-Lloyd, Head of Sport & Active Lifestyles said: “We have been completely blown away by the response of our staff and students this year. To more than double last year’s staggering entry is just amazing! I think it shows what a fabulous community we belong to at the University, and in Manchester, and this year’s run was a testimony to that.

A huge thank you to all our runners, the Great Run Company, and all those involved in the organising of this fantastic event.”

David Hart, Communications Director at the Great Run Company, said: “The sea of purple at the Simplyhealth Great Manchester Run was an inspiring sight and a superb initiative undertaken by the University.

With almost 2,500 entrants, it was of such a scale that it justifiably featured heavily on the BBC’s live coverage of the event.

“Well done to the Sport department for creating the campaign to engage so many students and staff into exercise and we hope to help further develop the project in future years."

Our Social Media Co-ordinator Paddy Crich took this time-lapse video - complete the 10k in one minute!