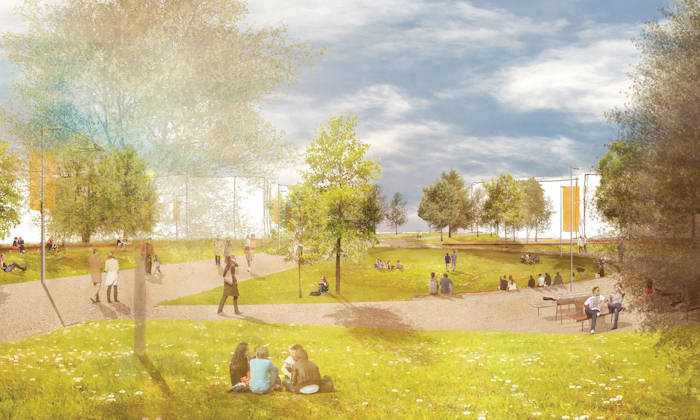 Work has now started at Brunswick Park (artist's impression above) and the Henry Royce Institute as part of the University’s Campus Masterplan.

The Brunswick Park project will create a new green space at the heart of the University to replace Brunswick Street which has now been formally closed.

It will create a focal point for large scale events such as graduations, performance and other outdoor activities as well as creating an informal park-like space set against the backdrop of the University’s historic buildings.

The work will begin at the end of April, with completion expected early in 2018. The work will be phased to ensure access in and around the buildings is maintained with minimal disruption.

As part of the work, there are plans to plant around 52 new trees to supplement the existing high-quality trees in the park. As part of the preparatory works, several trees will need to be removed but they will be replaced as part of the new design.

The new Henry Royce Institute will be located in a new building to the north of the Alan Turing Building, next to Upper Brook Street. The new nine-storey building will accommodate the UK’s home for advanced research and innovation.

The main contract works will take place between June 2017 and September 2019. In preparation, the contractors are undertaking site investigation works on the site and will be shortly removing a number of trees which are on the site.

The University is committed to replacing these trees elsewhere on campus as part of its Tree Policy to create a greener living campus which will enhance biodiversity and the quality of the University’s public areas.