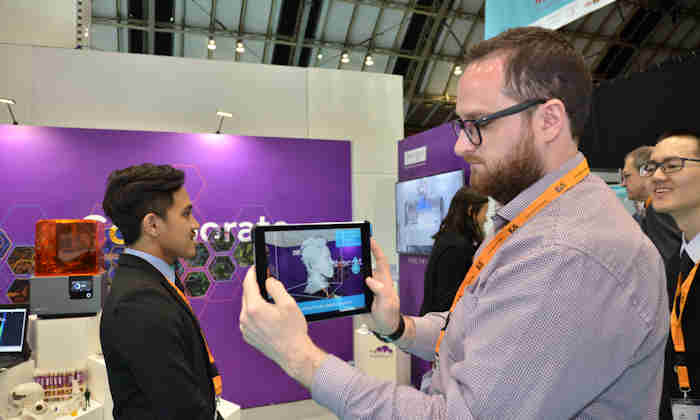 Pioneering developments in manufacturing led by the University – from the biomanufacturing of bone implants to the 3D printing of foodstuff like chocolate – have been showcased at a special Government-backed expo.

The Industry 4.0 Summit, hosted in Manchester this week and backed by Innovate UK, the Government’s innovation agency, was the first of its kind to be held in Europe. It attracted major companies interested in the latest innovation in Industry 4.0, the next transformational phase in industrial development.

Dr Carl Diver, an expert in Industry 4.0 from the University, and colleague Professor Paulo Bartolo, a world-leader in biomanufacturing, shared their expertise at an evidence-gathering session for the Industrial Strategy Commission at the event, which was run by the universities of Manchester and Sheffield.

The University is a recognised leader in research and education associated with Industry 4.0 and joined big name exhibitors to demonstrate its expertise. Our projects and activities included:

The University also demonstrated creative interactions between people and machines. The Manchester Robot Orchestra, an ambitious citizen science project that encouraged youngsters from across the region to recycle redundant technology to create musical robots, has been on display. The orchestra has recently been hailed in a national report co-published by the Royal Academy of Engineering as an innovative way of inspiring schoolchildren to take up engineering and help fill the skills gap in this critical sector.

Also, the Halléoojamaflipaphone, a project involving University apprentices in partnership with the Hallé orchestra to create a set of bespoke instruments, will perform at the expo.

Dr Diver said the fact Manchester hosted this summit revealed the city and the wider region was receptive to innovation and developments in world-leading manufacturing.  “Manchester is recognised as the birthplace of the first industrial revolution and the UK has maintained its pioneering reputation as we enter another phase of industrial development,” explained Dr Diver.