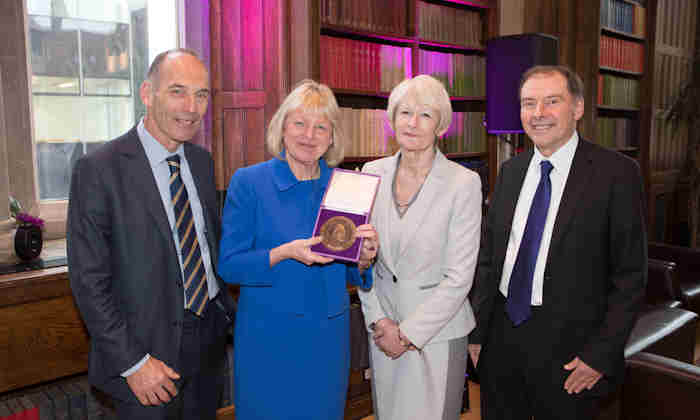 Vicky Rosin MBE, Programme Director for the Euroscience Open Forum (ESOF) 2016, has received the University’s highest medal, the Medal of Honour, from the Chair of the Board of Governors, Mr Edward Astle.

The presentation was watched on by her presenter Vice-President for Research and Innovation and Co-Champion for ESOF, Professor Luke Georghiou, President and Vice-Chancellor and ESOF Co-Champion, Professor Dame Nancy Rothwell, Vicky’s family and friends, members of the Board of Governor, senior University Officers and leaders from across Greater Manchester.

Vicky was responsible for leading on the planning and delivery of the largest ever multi-disciplinary science conference, ESOF, which took place in Manchester last July and for the co-ordination of the European City of Science; both of which have been considered incredible successes.   The University was a very major player in both and Vicky worked closely with colleagues to ensure that the institution benefitted as much as possible from both the conference and the European City of Science status.

Prior to this, Vicky worked in local government for over thirty years. She headed Manchester City Council’s Commonwealth Games Unit responsible for coordinating the council services that contributed to the successful delivery of the Games.

In 2003 Vicky took up the post of Director of Libraries and Theatres and, in 2005, she was appointed as Assistant Chief Executive with responsibility for Culture.

In 2009 Vicky was appointed as the Strategic Director of Neighbourhood Services, a post in which she was re-designated as Deputy Chief Executive (Neighbourhoods).  She held a wide ranging portfolio of responsibilities and represented the Council on several Boards/Trusts including The Community Safety Partnership (Chair), National Football Museum, Mental Health and Social Care Trust and the Central Library Development Trust

In June 2009 Vicky was awarded an MBE for her services to local government.

Vicky has been a great friend to the University over the course of her career and the Medal of Honour is a fitting way to recognise her contribution to both the city and the University.

At the event we also handed over an international client award from the International Association of Professional Congress Organisers to Vicky to recognise the great success of ESOF 2016.