Manchester charity UK-Med is partner in team verified by WHO

UK-Med, a disaster response charity based at the University's Humanitarian and Conflict Response Institute, is a partner in the UK’s International Emergency Medical Team which has been verified by the World Health Organization (WHO) as part of their emergency medical team initiative 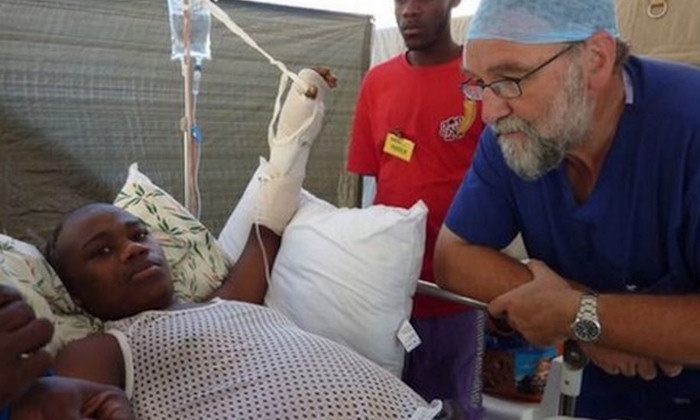 The team is a partnership between UK-Med, which recruits, trains and prepares its health care workers; the Department for International Development; NGO Handicap International, which specialises in rehabilitation; and the UK Fire and Rescue Service, which provides logistic support, safety and security.

The World Health Organization’s initiative identifies minimum standards and best practice, and provides operational field coordination support. This helps countries affected by a disaster or an outbreak to identify those teams that are appropriately trained and equipped when they seek international medical team assistance for the care of its population.

UK-Med grew out of the South Manchester Accident Rescue Team (SMART), which supported local rescue and ambulance services, and began in 1995 by sending medical volunteers to Sarajevo hospitals during the war in the former Yugoslavia.

Since then, it has responded to humanitarian crises caused by disasters and conflicts all over the world including Pakistan, Haiti and the Philippines, as well as Sierra Leone during 2014’s Ebola crisis and the 2015 Nepal earthquake. It has also trained local medics in affected countries.

It is staffed by academics from the Humanitarian and Conflict Response Institute (HCRI), which studies humanitarian aid and conflict response, global health, international disaster management and peace building.

The charity received an £8m Department for International Development (DfID) grant in 2016 to take charge of sending UK volunteers to the world's humanitarian disasters. Its recognition further cements the University’s reputation for addressing global inequalities – one of the University’s five research beacons of excellence alongside advanced materials, cancer, industrial biotechnology and energy.

“Establishing international standards for medical teams that respond to sudden large scale emergencies in another country has been an extremely important development in the last few years, emphasising the need for those most vulnerable to receive the best possible care,” said UK-Med head and HCRI deputy director Tony Redmond.

”I am extremely pleased that the UK Emergency Medical team has been verified by WHO as having met these standards.”