The Centre for Jewish Studies presents the annual Bogdanow Lectures in Holocaust Studies: 'The Church and the Holocaust' 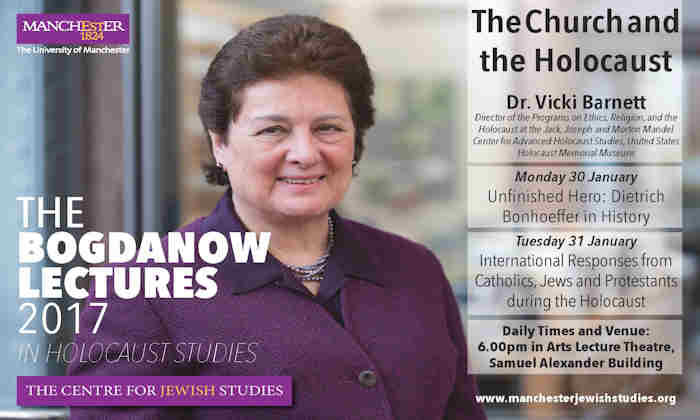 The Bogdanow Lectures in Holocaust Studies for 2017 will be delivered by Dr Vicki Barnett, director of the Programs on Ethics, Religion, and the Holocaust at the Washington Holocaust Memorial Museum.

The series is entitled 'The Church and the Holocaust' and she will give lectures on 'The Unfinished Hero: Dietrich Bonhoeffer in History' and 'International Responses from Catholics, Jews and Protestants' on 30 and 31 January 2017.

The Bogdanow Lecture Series, which coincides with Holocaust Memorial Day on 27 January, was made possible as a result of the generous bequest to the University by Fanni Bogdanow (1927-2013), a former Professor of French and Medieval Studies at Manchester and a child refugee on the Kindertransporte.

These events are free and everyone is welcome. The events are open to the public; there is no need to book a place.

The lectures will begin at 6pm and will take place in the Arts Lecture Theatre in the Samuel Alexander Building (Building 67 on the Campus Map).

On Monday 30 January there will be a kosher buffet from 7.30pm in the North Foyer of Samuel Alexander building.