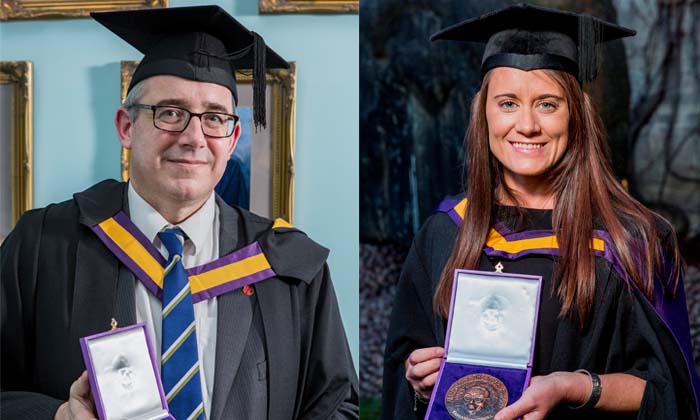 Two former Manchester students have been presented with awards by the University in recognition of their world-leading leading roles in humanitarian aid and emergency response.Gareth Owen and Karen O’Neill both won Outstanding Alumni awards, which are presented annually to alumni who have achieved distinction in their professions through exemplary service to local, national or international communities.

Civil Engineering graduate Gareth Owen has spent a quarter of a century working in humanitarian aid. From Somalia and Angola through to Uganda, Kosovo, Pakistan and Syria, he has witnessed some of the world’s most devastating crisis environments. He has led responses to numerous emergencies all over the world over the last two decades, including the Iraq conflict (2003), Asian tsunami (2004), and East Africa drought (2011).He has been Save the Children UK’s humanitarian director since 2007, and is co-founder of the Humanitarian Leadership Academy. He was awarded an OBE in 2013 in recognition of his services to emergency crisis response abroad.

“Gareth has devoted his professional life to humanitarian aid and he has been an outstanding leader of British humanitarianism,” said Professor Bertrand Taithe, Executive Director of the Humanitarian and Conflict Response Institute at The University of Manchester. “He is a model to our students, and we are honoured to recognise him, in particular for his work in leading responses to international emergencies across the world.”“It is humbling to be recognised as an outstanding alumnus of The University of Manchester,” said Gareth. “I hope my service to humanitarian aid can continue to inspire the next generation of students to make a difference in their profession.”

She has travelled to Uganda several times to teach nurses, support the treatment of children with chronic illnesses, and to work as a volunteer nurse at Gulu hospital. She also delivered emergency care to people on remote islands devastated by Typhoon Haiyan in The Philippines, and has trained local healthcare workers in Mumbai’s inner-city slums.

More recently, as well as completing a master’s degree in humanitarianism and conflict response at The University of Manchester, she has been a medical adviser on the National Ebola Response Programme - leading the instruction of UK clinicians in Malawi – and has also helped to prepare on-call emergency medical teams to respond to humanitarian disasters around the world.

“Karen has a hugely important role in emergency care internationally, and for this reason she is deserving of recognition,” said Professor Dame Nicky Cullum, Head of The University of Manchester’s Division of Nursing, Midwifery & Social Work. “Karen continues her dedication to disaster response and humanitarian aid and therefore, she is an outstanding Manchester graduate.”

“I’m deeply honoured for my work to be recognised by The University of Manchester with this outstanding alumni award,” said Karen. “I loved my time here both as an undergraduate student in Nursing and then later as a master’s student in Humanitarianism and Conflict Response. I’m delighted the University has acknowledged my work – and I would like to thank Manchester for the support and encouragement it gave to me.”