The amazing stories, studies and students of 2016 reviewed here 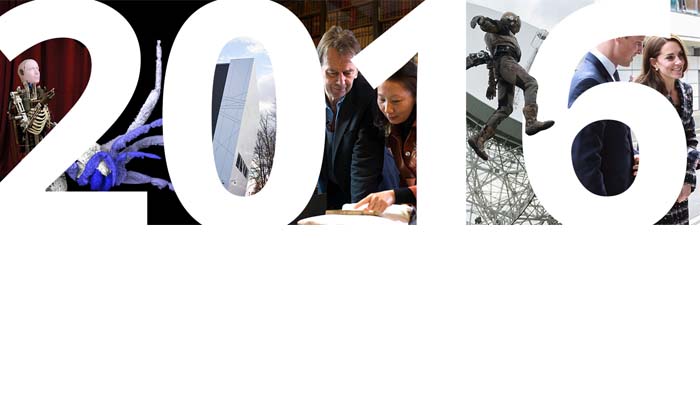 January: Witches, dinosaurs and the story of China

Dragons, witches and stormclouds kicked off 2016 at The University of Manchester. The John Rylands Library led the way with an exhibition which delved deep into the more occult offerings from its collection, while in Wales we identified a new dinosaur – named dragon thief in honour of its homeland.

We also got going with the ground-breaking Cloudy with a Chance of Pain study, inviting thousands of people to look into the link between the weather and their aches and pains.

Further afield, Professor Michael Wood’s landmark TV Show The Story of China hit the BBC2 airwaves, while a charity based at the University became the UK’s deployment lead to global humanitarian crises.

February: World Cancer Day and the beauty of the GEIC

World Cancer Day gave us the opportunity to highlight the world-leading research which goes into providing Manchester solutions to the global problem of this disease.

And our work on advanced materials also took a big leap forward as we revealed exclusive footage of our new Graphene Engineering Innovation Centre (GEIC) which was granted planning permission.

Our students were ranked the most targeted by employers in an independent report and one of our successful graduates, Oxfam International Executive Director, Winnie Byanyima launched our Global Development Institute with a powerful call to build a better world.

How do you know if your mince is telling porkies? Well, in March, our researchers developed a new test to battle the problem of food fraud. To much media attention, we also announced that we are developing a vaccine for the Zika virus, while a health check of a different kind was carried out by policy researchers into Greater Manchester’s devolution plans.

And just over a year after it reopened, the University’s Whitworth scooped gold at the VisitEngland awards, capping 12 months when it won prize after prize.

April was perhaps our most active month of the year as we got Manchester moving in all sorts of ways. The Manchester Museum got bouncy with the UK’s first inflatable museum, we ran a local community project to get expectant mums on the move and signed up over 1,000 staff and students for the Great Manchester Run.

The research didn’t stop though as we explored the way in which cancer cells turn their healthy counterparts to ‘the dark side’ and we opened a new academy to train the next generation of nuclear experts.

May: The weekend effect, a princess and the biggest movie in the universe

With the government in dispute with junior doctors, our research into weekend mortality in hospitals caused a major stir and questions in Parliament. We received lots of messages from Cornwall after we found arsenic in local water.

Our first royal visit of the year took place and we made rubber more rubbery. Here and abroad we helped people break the cycle of poverty and we joined forces with astronomers from across the world to make the greatest movie in the universe.

Our politics experts were everywhere in the news as Britain went to the polls in the EU Referendum. While here on campus there were also major developments as we opened an £18m biomarker lab and got the seal of approval for MECD – our huge new engineering campus. One of our existing buildings won a major award and our President and Vice-Chancellor was appointed to lead the British Science Association.

July: At the centre of Europe and solving a World Cup mystery

The EuroScience Open Forum arrived in Manchester with thousands of international visitors and, of course, the University was at the heart of the action. We also hosted Europe’s biggest cancer conference and one of our lecturers made the Man Booker Prize list.

Our scientists solved a mystery surrounding the World Cup trophy and we had experts on the spot reacting to the long-awaited Chilcot enquiry. Our students told their amazing stories of hope and endeavour as we celebrated graduation and we took inspiration from the stars for a new piece of music.

August: Taking on Alzheimer’s and rising up the ranks

Manchester achieved its highest ever place in the Academic Ranking of World Universities league table. We placed 35th in the world and 4th in the UK – keeping us on track to become one of the world's leading universities by 2020. That success is built on world-class research such as a new treatment for Alzheimer’s and studying the human body clock which we released in this month.

September: Investing in research and our students

For the new university year our students turned out in force – almost 8,000 of them on one day – to take part in a sustainability challenge helping them learn new skills from their first moments on campus.

Manchester’s place as a leading centre for research into diseases such as cancer was cemented with £28.5m of funding while research into an artificial brain also received more money.

October: A Royal visit and a robot orchestra

There was huge excitement in October as the Duke and Duchess of Cambridge visited our National Graphene Institute and MECD site, with Prince William getting to have a go in a car with graphene components.

Professor Danielle George took her Robot Orchestra to Manchester Science Festival and we revealed a new treatment for autism. With all that endeavour it’s no surprise that we leapt up a list of innovative universities.

Inequality was a focus for research in October. We investigated suicide, birth and the very real disparities in life expectancy across our city using the tram network. The threat to the natural world was explored too, with animal refugees and carbon emissions making the news.

But there were also stories of hope – scholarship funded students from Africa told us their stories of how a Manchester education was helping them make a difference in their communities.

November was a month of celebrations. Our students invented products to change lives and won a ‘junior Nobel’, we marked 80 years the birth of British TV, ten years of the Confucius Institute and 46 years of nursing degrees. Our staff won awards for their outstanding work and our activity in the community also picked up prizes.

Despite all this we still found time to understand the formation of the universe, test new stroke treatments and investigate the global football industry.

December: Manchester is a global city

We received a huge funding package from Cancer Research UK which demonstrated our global leadership in cancer study and treatment. Our cosmopolitan city was mapped by our researchers and we showed how pets can help those with long-term mental health conditions.

Our winter graduation revealed truly inspiring stories of how students had overcome barriers, changed thier lives and were making a difference in their communities.

December summed up the University’s year – working on the world’s biggest problems and issues and drawing on our cosmopolitan city and community to inspire, investigate and challenge.

We finish 2016 with a thank you to the staff, students and partners who made it such a remarkable year and here’s to an equally outstanding 2017!