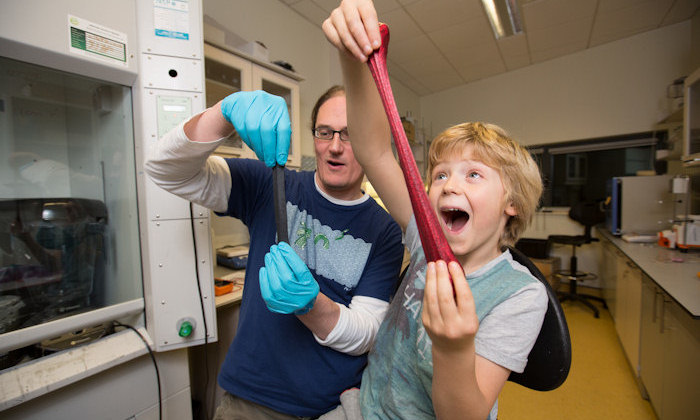 This world first research, led by Professor Jonathan Coleman, Trinity College Dublin and in collaboration with Professor Robert Young of The University of Manchester, potentially offers exciting possibilities for applications in new, inexpensive devices and diagnostics in medicine and other sectors.  The team’s findings have been published in the leading journal Science.

Prof Coleman from Trinity’s School of Physics along with postdoctoral researcher Conor Boland, discovered that the electrical resistance of putty infused with graphene (‘G-putty’) was extremely sensitive to the slightest deformation or impact.

They mounted the G-putty onto the chest and neck of human subjects and used it to measure breathing, pulse and even blood pressure. It showed unprecedented sensitivity as a sensor for strain and pressure, hundreds of times more sensitive than current sensors.

The G-putty also works as a very sensitive impact sensor, able to detect the footsteps of small spiders. It is believed that this material will find applications in a range of medical devices.

Prof Young, Professor of Polymer Science and Technology said: “The endless list of potential applications of graphene, a material first isolated in Manchester, never ceases to amaze me. We have now developed a new high-performance sensing material, ‘G-putty’, that can monitor deformation, pressure and impact at a level of sensitivity that is so precise that it allows even the footsteps of small spiders to be monitored.

“It will have many future applications in sensors, particularly in the field of healthcare. The collaboration has been undertaken under the umbrella of the European Graphene Flagship, in which Trinity College Dublin and The University of Manchester both play a prominent role. It is an excellent example of what is being achieved in the Flagship programme.”

The material was developed at Trinity College Dublin. The NGI contributed to the work through analysing the structure of the material using the facilities available at the world-leading institute. Manchester-based scientists were then able to develop a mathematical model of the deformation of the material to explain the effect of its structure upon its mechanical and electrical properties.

Prof Coleman said: “What we are excited about is the unexpected behaviour we found when we added graphene to the polymer, boric acid-treated polysilicone. This material is well known as the children’s toy Silly Putty. It is different from familiar materials in that it flows like a viscous liquid when deformed slowly but bounces like an elastic solid when thrown against a surface.

“When we added the graphene to the silly putty, it caused it to conduct electricity, but in a very unusual way. The electrical resistance of the G-putty was very sensitive to deformation with the resistance increasing sharply on even the slightest strain or impact. Unusually, the resistance slowly returned close to its original value as the putty self-healed over time. “

He continued, “While a common application has been to add graphene to plastics in order to improve the electrical, mechanical, thermal or barrier properties, the resultant composites have generally performed as expected without any great surprises.

“The behaviour we found with G-putty has not been found in any other composite material. This unique discovery will open up major possibilities in sensor manufacturing worldwide.”

Graphene, the world’s first two-dimensional material, was first isolated in 2004 at The University of Manchester, and has the potential to revolutionise a large number of applications, including those in medicine – from providing clean drinking water for third-world communities to anti-cancer treatments, from the aircraft of the future to flexible, bendable mobile phones and tablets.