A project which trained older people to be researchers into the future of their city has won a major national award for its ground-breaking work, on a night when two other Manchester projects were also shortlisted 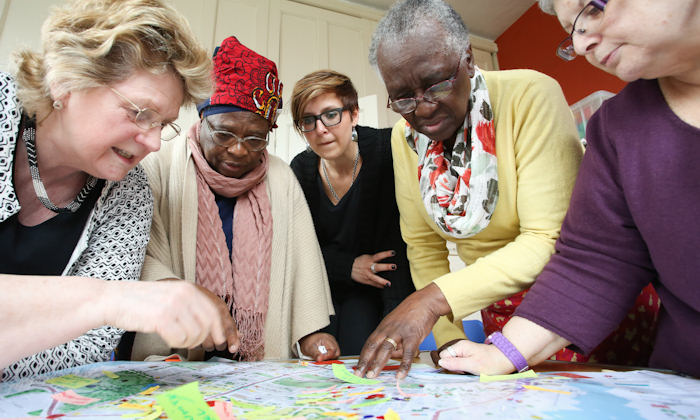 The Researching Age-Friendly Communities initiative was developed in response to the fact that in 15 years, a quarter of the world’s population living in cities will be over-60, as more and more people choose to stay or grow old in urban environments.

Ageing in cities has major implications for services such as transport, housing and the prevention of social isolation. The Manchester researchers – led by Dr Tine Buffel (supported with funding from the European Union) – trained people in their 50s through to their 80s to become ‘co-researchers’, who then conducted interviews in Manchester neighbourhoods amongst older people likely to be experiencing problems associated with social isolation, poverty and poor health.

Throughout the project, a range of public engagement activities were held, including meetings, winter warm events, coffee mornings and neighbourhood social gatherings.

The project was presented at these events by the co-researchers to increase awareness and to strengthen links with community organisations.The project led to direct policy outcomes for Manchester City Council, with older people actively influencing solutions to many of the challenges experienced by their fellow older residents in the city.

The project scooped an Engage Award on 29 November, recognising that the project is among the best in the sector for involving the public in university work. It was led by the University’s Manchester Institute for Collaborative Research on Ageing (MICRA), working with Manchester City Council, Whalley Range Community Forum, Chorlton Good Neighbours Neighbourhood Care Group, Age Friendly Whalley Range and Chorlton and others.

“I’m delighted that Manchester’s age-friendly partnership working with older co-researchers and community organisations has been recognised in this way,” said Chris Phillipson, Professor of Sociology and Social Gerontology at the University and one of the researchers on the project.

"Everyone has gained from having older people as co-researchers working alongside to improve the age-friendliness of their neighbourhood, and to improve the quality of life in low-income areas.”

“We hope this will inspire more researchers to utilise the vast skills, experience and resources of older people in all stages of research, from design and implementation to analysis and dissemination of findings.”

Also among the 18 shortlisted for the awards were two other projects from Manchester. One, ‘Our Health, Our Future’ and involving Manchester Academic Health Science Centre, Public Programmes at Central Manchester NHS Trust, The University of Manchester and Manchester Schools Alliance, enabled secondary school students to work with researchers to address public health research challenges in their local communities.

The other project, ‘The Lived Experience of Climate Change: A Story of One Piece of Land in Dhaka’, explored research through a ‘Pot Gan’, a traditional folk performance which encouraged slum dwellers, researchers, practitioners and policymakers to reflect on the day to day realities of living with climate change in Dhaka.

Professor James Thompson, Associate Vice-President for Social Responsibility, said: “Working in communities around the world is an essential part of the work that we carry out here at Manchester. Having three out of the eighteen shortlisted awards shows the range of activity which we carry out every day and the passion of our staff in making sure that their work has an impact on people’s lives.”

The Engage Awards are organised by the National Co-Ordinating Centre for Public Engagement (NCCPE).