Manchester graduates launch QuadBot to break down barriers to learning 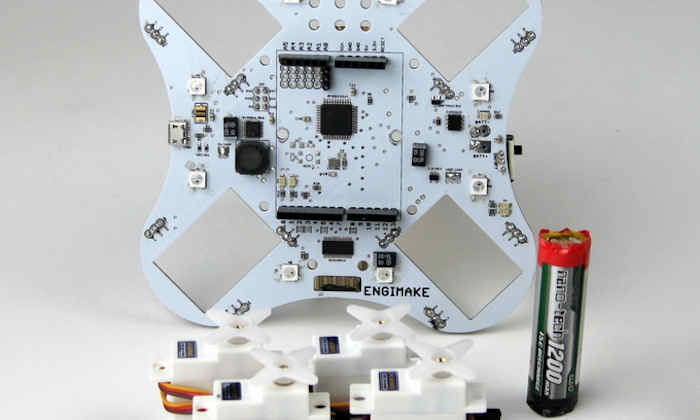 Two pioneering engineering graduates have launched a DIY walking robot which anyone can build with 3D printing technology.

Jack Scott-Reeve and Josh Elijah, who graduated with Masters degrees in engineering from the University’s School of Electrical and Electronic Engineering, have developed QuadBot, a 3D printable walking robotics platform. Their aim is to help as many people as possible to learn about robotics.

“Our dream is to have everyone making robots and we really want to bring QuadBot into schools to inspire the next generation of makers,” said Jack Scott-Reeve.

The pioneering learning tool - which is intended to be used in project groups and workshops - helps users with little or no prior experience the chance to understand electronics, coding, 3D design and printing, and maths for robotics.

“There is so much potential for users. QuadBot can walk, dance, light up – and, with sensors, he can follow you around while avoiding any obstacles. He can even play songs.”

Quadbot has been launched on Kickstarter, a global community that supports creative projects through crowdsourcing.

The animal-inspired QuadBot comes as a kit which features a ‘Quadboard’, motors and other non-printable components while the rest of the bespoke machine can be made using domestic 3D printing technology.

Jack and Josh, who started at the University of Manchester in 2010, soon founded their own Robotics Society after recognising that hands-on making was just as important as the theory.

“With the support of the University, our society was very successful and we continued the initiative until we graduated.

“After graduation we then ran many workshops teaching engineering and robotics to the maker communities using Fab Labs around London,” added Josh Elijah.

“In May 2016 we decided to focus our career solely on engineering education so we founded EngiMake in March 2016 with one goal - opening up robotics to every ‘maker’.

“We were frustrated with the quality of engineering education in the UK and the lack of expandable, exciting and low-cost robotic kits available so we decided to create our first product, the QuadBot.

“We have set out to break down the barriers to learning robotics by engaging with people, communicating knowledge effectively, leveraging the strength of open-source, and tearing down costs.”