Babies’ first gestures: a key sign of how they’ll talk

Babies' first gestures are a reliable indicator of how their language will develop, according to new research to be highlighted at the ESRC Festival of Social Science 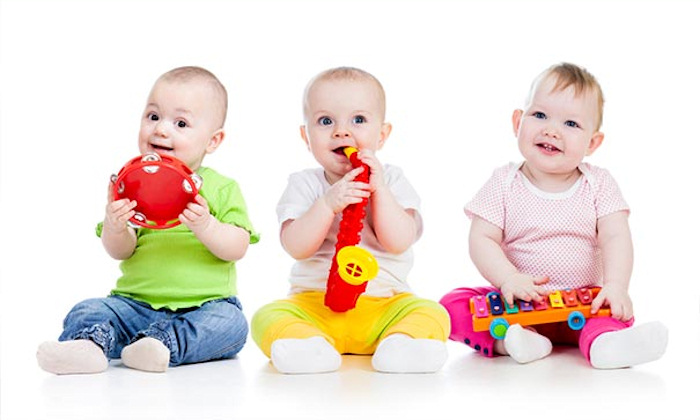 Many parents believe their infant's first word is the most important milestone in learning to speak. However, research from the University of Manchester suggests that simple behaviours – such as holding up objects to show or share – are just as key and learning what they mean helps parents become effective ‘baby whisperers’.

“Our research demonstrates that babies may be doing more to communicate than many of us usually assume, and at an earlier age,” says Professor Elena Lieven, Director of the ESRC International Centre for Language and Communicative Development (LuCiD) at the Universities of Manchester, Liverpool and Lancaster. “By understanding these early behaviours, parents have a great opportunity to help support their children’s later language development. Understanding babies’ gestures could be just as important as understanding their early language.”

Humans are the only species who communicate as a way of sharing attention with others. Attention-sharing involves a person matching their focus of attention with another individual such as following their gaze or showing them an object. How this skill develops is crucial to understanding human cognition and language and a key question for scientists. Attention-sharing begins before other forms of communication, including talking. It has a direct effect on language development, but often goes undetected or overlooked by even experienced parents or caregivers.

Until now, studies have mostly focused on an infant’s use of pointing with their index finger, a form of communication which usually appears at around 10 to 12 months. However, Dr. Cameron-Faulkner together with colleagues Laura Boundy and Professor Anna Theakston have turned their focus to even earlier pre-linguistic behaviours. Their research has been based on analysing interactions between children and their caregivers.

They videoed how caregivers and 24 boys and girls aged 10 months communicated using a selection of toys. The aim was to identify ‘showing’ and ‘giving’ behaviours and identify the ‘micro-behaviours’ – the tiny behavioural cues – which might indicate what babies are trying to tell us before they can speak. They then analysed the responses of parents/caregivers to these behaviours. The children were followed up until the age of 12 months.

The researchers found that ‘showing and giving’ behaviours are strong predictors of how often infants use pointing later on. Their studies also highlight that most parents are often puzzled by the intentions behind these behaviours, despite them being widespread. How caregivers respond to these behaviours, in particular whether they engage in language-rich bouts of interaction, relates to the frequency of pointing behaviours as infants get older. This demonstrates the importance of parents picking up on early gestures.

“What we’ve found is that talking to babies about the things they’re showing an interest in helps their language development,” says Professor Lieven. “The ability to share and direct attention is an essential basis for typical language development, and others have found that it is often impaired in children on the autism spectrum. Our findings provide useful guidance to both researchers and caregivers in the identification of infants’ early attempts to communicate about objects with their caregivers, and highlight the need for greater study of these early pre-linguistic behaviours.”

Professor Lieven and her colleagues will be sharing these discoveries by researchers on babies’ communicative development as part of an event entitled Art Baby–Music Baby–Language Baby on 9 November for the general public. The event is part of the ESRC’s flagship annual Festival of Social Science, and invites babies and grown-ups to take part in sensory play sessions.