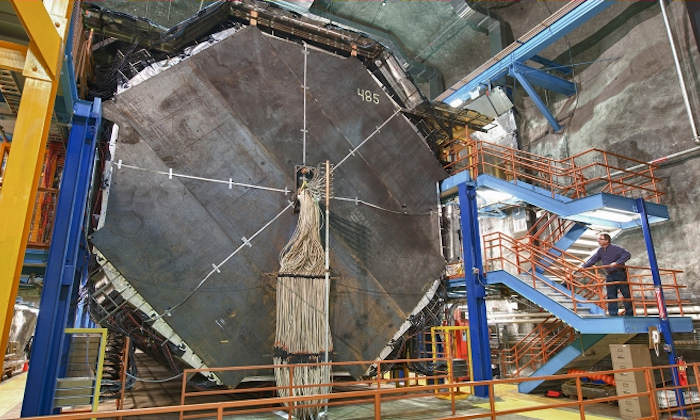 Dr Justin Evans, senior lecturer in particle physics, said the elusive ‘sterile’ neutrino, if proven to exist, has the potential to unlock the great mysteries of our Universe – even potentially explaining why we exist as we do. Researchers believe identifying this new particle would be even more significant than locating the original so-called ‘God particle’, the Higgs boson.

As part of an international collaboration Dr Evans has been the Physics Coordinator on the MINOS experiment, leading the experiment’s physics programme. As well as leading this part of the MINOS collaboration he also coordinated the research combination with another programme called Daya Bay.

The MINOS experiment uses an intense beam of muon neutrinos that travels 735 km from the Fermi National Accelerator Laboratory (Fermilab) in Chicago to the Soudan Underground Laboratory in northern Minnesota. MINOS has made world-leading measurements to study how these neutrinos disappear as they travel between the two detectors.

The Daya Bay experiment looks at electron antineutrinos coming from a nuclear power plant in the Guangdong province of China. The Daya Bay project measured, for the first time, one of the parameters governing neutrino oscillations.

The joint results from these two experiments have significantly shrunk the hiding space for a sterile neutrino to be found – inspiring researchers to continue their hunt.

“Finding a sterile neutrino would be an even bigger discovery than finding the Higgs boson,” explained Dr Evans. "The Higgs boson was a prediction of the Standard Model of particle physics - a system that attempts to describe the forces, components and reactions of the basic particles that make up matter - and therefore its discovery, although momentous, wasn’t a surprise."

"However, the sterile neutrino would be something really brand new - it would be new physics beyond the Standard Model and would open the door to solving some of the biggest puzzles in cosmology and particle physics."

The possibility of doing this ground-breaking measurement with MINOS is Dr Evans’s brainchild – and now, alongside co-researcher Manchester PhD student Ashley Timmons, this milestone work has been recognised and published in the prestigious journal, Physical Review Letters.

The University researchers are delighted to have reached this stage in their analysis because they believe its puts them are on the threshold to eventually finding the sterile neutrino.

Dr Evans added: “When I’m asked how long until we discover the sterile neutrino I tempted to say, ‘how long is a piece of string?’ However, these new Manchester-led results have really narrowed down the region where the sterile neutrino could still be hiding - and we have much more MINOS and Daya Bay data waiting to be analysed; we should be able to make an even more definitive statement in the next couple of years."

“Furthermore, at Manchester, we are part of a new project called the MicroBooNE experiment – also based at Fermilab – that is a dedicated sterile neutrino search. This can really focus over the next few years on that small region that’s left and either find the light sterile neutrino or rule out its existence completely. I hope that five years from now we’ll have a firm answer on the existence of these light sterile neutrinos - but it’s always hard to make predictions about the future.”

Neutrinos only interact with matter through the feeblest of forces, the weak nuclear force and gravity, yet they play critical roles in an incredible range of phenomena. They influenced the formation of the early Universe and may be the reason why matter came to dominate over antimatter shortly after the Big Bang.