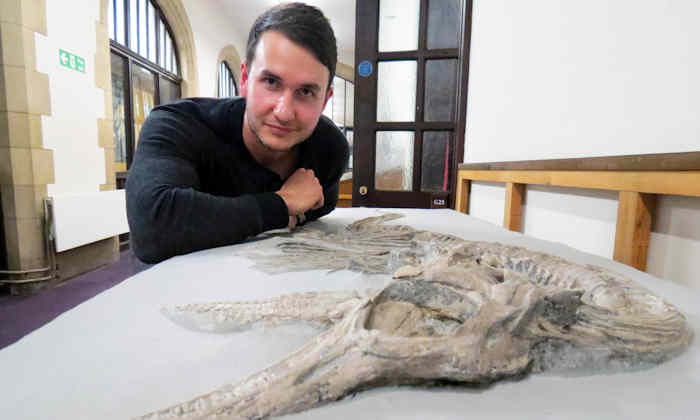 Ichthyosaurs lived during the Age of Dinosaurs, but were ocean-dwelling reptiles that resembled dolphins or sharks.  The new species lived around 200 million years ago in the early Jurassic period.

One of the new species was identified from a specimen at the University of Bristol - a complete skeleton which has been on public display for many years. The species has been called Ichthyosaurus larkini, in honour of British palaeontologist Nigel Larkin.

Dean said: “It’s quite amazing - hundreds of people must walk past this skeleton every day, yet its secrets have only just been uncovered.”

The second species has an equally interesting history. The key specimen was probably collected from a Somerset quarry in the 1840s. It was sent to Delaware, USA by Edward Wilson of Tenby, for his brother, Dr Thomas Wilson, who donated the specimen to Philadelphia’s Academy of Natural Sciences in 1847, where it has remained ever since. The specimen has been in storage, and few people knew that it even existed.

Dean adds: “In my opinion, this specimen is the best example of Ichthyosaurus collected to date – it’s like a good mystery book, piecing the story together!”

“As many Ichthyosaurus specimens have been found in Somerset we decided to name this in honour of the county and called the species Ichthyosaurus somersetensis. There are plans to have the specimen placed on display.”