A storyteller in China

Professor of Public History Michael Wood discusses his recent BBC series, The Story of China – and his love affair with the past 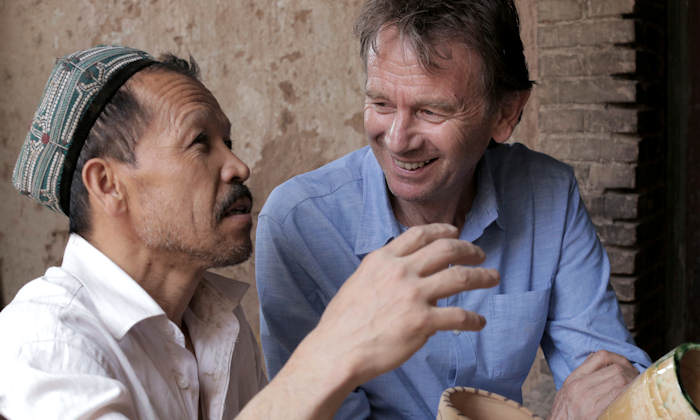 Michael Wood is many things: filmmaker, author, TV presenter, Professor of Public History. His work has taken the international viewing public around the world and brought the annals of history alive, from Ancient Greece to India, Anglo-Saxon Britain and, most recently, China, in a BBC six-parter that won plaudits in the Far East and at home.

As one of his musical heroes, Bob Dylan, put it in Tangled Up in Blue (Wood, a youthful 67, is a teenager of the 1960s), he’s “still on the road” and, despite pleas from his elderly mum, his zest for adventure, filmmaking and the past show no sign of abating.

“History is a reality check,” he explains. “History tells you who you are and where you are.”

It’s in China that he has found himself for much of the past two years, making 12 visits to capture The Story of China – a TV chronicle of the world’s newest superpower, told in Wood’s trademark warm and empathetic style of storytelling.

“To me, empathy is a very, very important word. It’s an important word in making films; it’s an essential quality of being a historian,” he says.

He set out to offer a counterbalance to some mainstream western narratives on China by showing its “real heroes” – its people.  The series gained an overwhelmingly positive response from the public in Britain and in China, where it drew in up to one million viewers per episode on pirate websites. From a TV career spanning 110 documentaries, he says more strangers approached him about this than any other.

Cramming China’s past – and present – into six hours was no easy feat, explains Wood.

“You can’t just do a string of emperors, so what we set out to do was go down to village level, to involve the Chinese people. China’s not a culture that people know much about in the west and it’s not a culture that, in my experience, people feel that warm towards. People think the Chinese people are difficult to get to know, but from my first experience in China, back in the 1980s, I came away with a real sense of how hospitable and sociable they are,” he says.

“On the first day, I told the team doing this series: ‘One of the most important things for us to convey is the sense of warmth and fun of the Chinese people’.”

People and history go hand-in-hand for Wood: “I’ve done stories of kings and queens, and stories of peasants, but history is about people. Stories are what make history tick.”

They’re also what brings Michael Wood to exuberant life as he regales with stories of the people he has met along the way, including the Chinese family who featured in episode three of the BBC series, unfurling a magnificently long painting of their family lineage, sensationally rescued from the Taiping rebellion of the 1850s and buried during Mao’s cultural revolution.

“It’s one of the wonderful things about the job. The idea that you’re welcome into a household or family, that you could sit in a stifling hot room in the south of India and feel this electric current, this voice from history – it’s just an amazing privilege and I’ve always loved that. You really learn things when you just listen to people and see their way of life.”

Family history is where Wood’s own fascination with the past started, specifically his relatives’ roles in World War II. “My uncle Sid was torpedoed and sunk in the middle of the Mediterranean and swam through burning oil; my dad was in the hospital at Haslar on D-Day looking after the dead and the dying; Mum was caught in the blitz in the middle of Manchester and sheltered in a doorway all night. These are just the stories of one family,” he reveals.

His interest was captured further as a schoolboy at Manchester Grammar School, where he was given an impromptu lesson in Manchester’s rich and radical past on his first day.

In the oldest traditions of the BBC, Wood sees his work as a public service, and it is the enthusiasm that he inspires in young history-lovers that spurs him on. He shares an anecdote of a red-haired high-school girl who approached him with excitement about his series In Search of the Trojan War, declaring she would one day be an archaeologist after watching the show. He met that red-haired archaeologist ten years later on a dig at Troy.

“For young kids, history is telling good stories,” he says. “For older kids, it’s helping to start situate you in a wider world. I think it gives meaning to the present and it gives value. To say that history is not relevant is a real mistake.”

Many years on from the start of his own love affair with the past, Wood – filmmaker, author, TV presenter, professor – is ‘still on the road’ and still learning.  “Curiosity is a great thing,” he says. “It takes you a long way.”