A grand effort from 1,000 runners raises thousands for charity 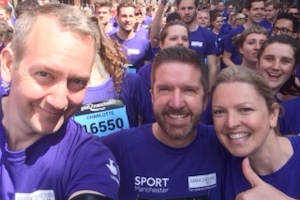 Well done to the 1,114 staff and students who completed the Great Manchester Run as part of the first ever University Purple Wave – and generated thousands of pounds for charity.

The total currently stands at £59,512 and money is still pouring in.

The initial idea came from Director of Student Recruitment and International Development Mike Gibbons, Professor of Linguistics Kersti Borjars and Head and Sport and Active Lifestyles Vicky Foster-Lloyd. Vicky put her SPORT Manchester team at the helm, in partnership with Students’ Union, to meet the target of 1000 runners generating £100k for Charity.

The largest individual fundraiser is currently Steve Pettifer, School of Computer Science, who has raised nearly £1,500, and the largest group fundraiser has been the University Women’s Hockey Club, which has raised over £3,500.

Six months of preparation included seven additional weekly running sessions for the 646 students and 468 staff that had registered to race along with lots of meetings and emails between the Great Run Team, Students’ Union, Student Communications and Marketing team alongside several other University teams.

Sunday arrived and our purple runners congregated in the Renold building and University Supporters walked up to the Purple Cheer Point on Chester Road. There was a real buzz on North Campus, seeing the purple stream line the streets of Manchester and hearing the cheers from everyone supporting, filled students and colleagues with great pride.

SPORT Manchester aim to engage more people in sport and physical activity and are in their third year of being a successful Sport England University Activation Funded Institution.

This event hit those notes with 901 race finishers, 409 of which were new to running. Special mention to Gary Rowlinson, Assistant Maintenance Services Manager at the Directorate of Estates and Facilities, who finished in 35:04 and Dan Pettitt, student and Treasurer University X-Country Club, with a time of 36:06 and Anne Kenchington finishing in 39:04 and Sinead Sweeney with a time of 39:39, both students and members of our University X-Country Club.

Professor Ian Cotton, from School of Electrical and Electronic Engineering, who achieved a time of 53.50, said: "The fact I would be running with 1,000 others from the University inspired me to enter even though I had not run since school. I now feel so much better than I did. I'm much less tired and have lost a significant amount of weight through doing this. While I have a medical condition that causes high blood pressure, this has also reduced since I started running and my GP is very impressed. While I can't see myself ever doing a longer distance, I'm sure going to keep it up and see if I can push my time down.

"Thank you so much to you and the rest of the team who organised this. A great day with an impact much more than the day itself."

Vicky Foster- Lloyd said: “To line up on the start line with over 1,000 colleagues from across the University community, all in purple t-shirts, is a memory that I will never forget.

“Many of the runners had never taken part in this kind of event before and with over 400 stating they were new to running. To know that we have inspired so many people to get active and raise money for worthy causes is so pleasing and demonstrates what a great place the University of Manchester is.”

To watch BBC coverage of our efforts, visit:

To see photos of our colleagues and students in action, visit:

To be kept up to date with information about becoming part of the 2017 event (on Sunday, 28 May), visit: