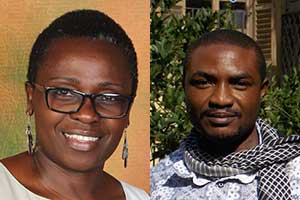 The latest in the Literature Live series welcomes Abubakar Adam Ibrahim and Jennifer Nansubuga Makumbi. This event will be chaired by Centre for New Writing senior lecturer Geoff Ryman.

Abubakar Adam Ibrahim is a Nigerian writer and journalist. His debut short story collection The Whispering Trees (Parresia Publishers, 2012) was long-listed for the Etisalat Prize for Literature in 2014. The title story was shortlisted for the prestigious Caine Prize for African Writing in 2013. Ibrahim has won the BBC African Performance Prize and the Amatu Braide Prize for Prose. He is a Gabriel Garcia Marquez Fellow (2013) and a Civitella Ranieri Fellow (2015). He was listed by the Hay Festival in the Africa39 list of the most promising sub-Sahara African writers under the age of 40. He judged the Writivism Short Story Prize in 2014 and was a judge for the Short Story Day Africa Prize and the Etisalat Flash Fiction Prize in 2015. His debut novel Season of Crimson Blossoms will be published in the UK in May 2016 by Cassava Republic Press.

Jennifer Nansubuga Makumbi, a Ugandan novelist and short story writer has a PhD from Lancaster University. Her novel, Kintu, won the Kwani Manuscript Project in 2013. It was published in 2014 and was longlisted for the Etisalat Prize 2014. Jennifer has published numerous short stories. Her short story, Lets Tell This Story Properly won the overall Commonwealth Short story prize 2014. Her short story Malik’s Door came out in Closure a Black British anthology in October 2015. She is currently working on her second novel Nnambi was Fish while compiling a collection of short stories, Travel is to See, Return is to Tell.

Tickets are FREE but booking is essential: