Asylum seekers and the communities they are dispersed to are being ignored in favour of cheap housing and minimal services, say researchers 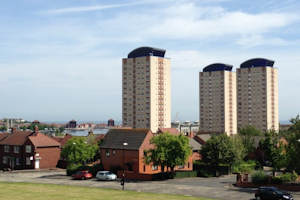 The UK’s asylum accommodation is evaluated in terms of the profit it generates rather than the well-being of those living there, according to new research by University researchers.

Dr Jonathan Darling, an expert on European migration and asylum, says the UK government’s asylum support system has rapidly diminished, creating a dependency on limited charitable provision in some parts of the UK.

The new research is the first study into the UK’s provision of asylum accommodation since it was privatised in 2012 – a move aimed at saving the Government around £150 million.

The six contracts signed by the UK government in March 2012, collectively known as COMPASS, transferred accommodation provision from a mixture of local authorities, social housing associations and private providers to three private contractors.

Dr Darling’s research, funded by the ESRC, critically examined the enforced placement of asylum seekers through dispersal – the process that identifies where asylum seekers should be housed.

He said: “Asylum accommodation has been badly hit by cutbacks since the introduction of austerity measures. Asylum seekers are seen as a burden in the UK, and this has meant that concerns over profit have taken precedence over the needs of asylum seekers.”

The study highlights how the dispersal system is increasingly fragmented and uneven across the country since being privatised with asylum housing only viewed in terms of resource allocation, cost and productivity.

“What we've seen across the UK, is that the process of privatising asylum accommodation differs a little in terms of local context, but has predominantly resulted in a reduction in support provision, gaps in responsibility for addressing complaints, and a lack of long-term planning or consideration for integration,” said Dr Darling.

The cuts, according to Dr Darling, are socially isolating asylum seekers as the expertise developed within local authorities working with asylum-seekers has often been lost through privatisation.

“This reflects wider fears that the well-being of all involved in dispersal – asylum seekers and the communities they are dispersed to – are being ignored in favour of providing cheap housing and minimal services,” continued Dr Darling. “This has meant a changing geography of provision and a lack of long-term planning as to how asylum seekers may fit in communities across Britain.”

The paper also finds that the transfer of responsibilities in the asylum accommodation process from local authorities to private providers has had significant impacts on local authorities and their engagement with dispersal.

“Local authorities are no longer able to shape policy discussions or challenge the judgement of the Home Office. They no longer retain power over accommodation decisions. This has meant that some local authorities are now resistant to taking part in dispersal as it has become a process that is largely out of their hands,” said Dr Darling.