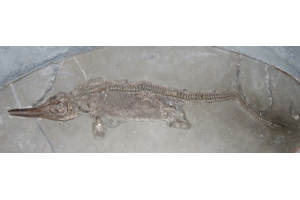 A new study has identified two new specimens of a rare ancient marine reptile, and has for the first time revealed the pelvis bones of the species.

Ichthyosaurs were reptiles that lived in the ocean while dinosaurs – their cousins – walked on land. A similar shape to dolphins and sharks, they evolved many millions of years before the first dinosaurs appeared.

The first specimens were found in England in 1821, and were named Ichthyosaurus by palaeontologists Henry De la Beche and William Conybeare. In 1888, British scientist Richard Lydekker described a new species of ichthyosaur found in Jurassic rocks off the coast of Dorset, and called this species Ichthyosaurus conybeari in honour of Conybeare.

This small-bodied species is the rarest of the currently recognised species of Ichthyosaurus, and was previously known only from two specimens.

The key specimen of this study was collected in the 1980s from Jurassic rocks along the Watchet coast at Doniford Bay, Somerset. It was later acquired by the National Museum of Wales, Cardiff, where the specimen was first put on display in the early 1990s. It had been on display ever since, but had remained unstudied.

Dean said: “Palaeontologists make discoveries in the field, the laboratory and behind the scenes in museums, but this came as a surprise as it was on display and had been missed. The coolest thing about this specimen is that the pelvis is preserved – the pelvis of this species was unknown, and is completely different to any other species of Ichthyosaurus.

“This species was poorly understood, and our study has doubled the number of specimens known. The identification of the new specimens has allowed us to trace the geological range of the species from around 195 to 189 million years – the longest range of any species of the genus.”