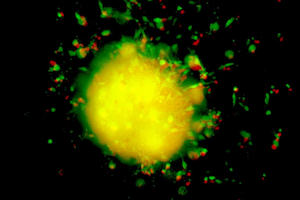 An HIV DRUG could stop one of the early changes in skin cancer cells that leads to them becoming resistant to treatment, according to a Cancer Research UK-funded study published in the journal Cancer Cell.

The researchers looked at melanoma skin cancers from 11 patients who had started standard treatment for the cancer. They found that the cancer cells used a molecular switch to temporarily rewire themselves to become more able to withstand the drugs in the first two weeks of treatment, and then went on to develop permanent resistance through genetic changes.

The HIV drug, called nelfinavir, works by blocking the molecular switch which boosts cells’ ability to survive treatment. The research, carried out in mice, suggests that nelfinavir could be used in combination with standard skin cancer treatments to make them more potent and delay drug resistance, making available treatments effective for a longer period of time.

“But if we can target skin cancer cells before they become fully resistant, we would have a much better chance of blocking their escape. And we think this research has brought us one step closer to making this a reality.”

Professor Nic Jones, Director of Cancer Research UK’s Manchester Institute, said: “Melanoma can be difficult to treat because the cancer becomes resistant to drugs quite quickly. But this exciting research means we might be able to fight back by blocking the first steps towards resistance, so that treatments are effective for longer.

“While drug resistance is a big challenge, we’re making great progress. Drug resistance in late stage skin cancer is still a big problem and something we need to tackle. We’ve seen big steps forward recently with the development of immunotherapies but this exciting approach could stop skin cancer developing resistance at an earlier point.”