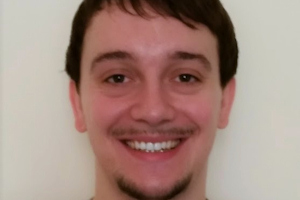 Sam – who quit his construction job to embark on a University apprenticeship before gaining a First Class Honours degree – has taken up the role of Experimental Officer with Manchester’s School of Electrical and Electronic Engineering.

This pathfinder role deliberately aims to promote innovation in the teaching of this fast-paced area of engineering.

“I see myself as a ‘futurologist’. I am always looking out for the latest trends in technology - then I make sure these new developments are reflected in our learning materials,” explained Sam.

Sam is constantly keeping up-to-date by scanning digital networks, such as the news site Reddit, and using this information to inform the bespoke teaching tools he is creating.

“Technology is shrinking fast and physical objects are increasingly interlinked thanks to digital communications, a phenomena called the ‘internet of things’. Very soon we will have tiny computers embedded in many everyday items to make our world much smarter,” he said.

“This means electrical engineering is probably one of the most exciting and pioneering fields in academia – and my aim is to help make sure our teaching tools are keeping pace with this change.”

Sam has already created a package of digital learning tools which include a series of ‘how-to videos’ and a selection of detailed virtual components - hosted by the Blackboard virtual learning environment - to help students construct 3D prototypes of planned projects.

“It’s very exciting to be working with academics and students in this way as a professional engineer - I strongly believe it’s enhancing the learning experience.”

Sam credits senior lecturer Peter Green from the School of Electrical and Electronic Engineering for proposing this catalytic role within the school and also support from Malcolm Bailey, manager of the schools’ Electronics Workshop.

Sam is also engineering efficiency where he can make a difference. For example, he has advised his team to buy-in microprocessors because, thanks to modern manufacturing techniques, it’s now significantly cheaper than building these items in-house.

Sam’s diverse career with the University began in 2007 when he quit his electrician’s role on a building site to enrol on a four-year apprenticeship programme which led to an NVQ in Engineering. Concurrently, he earned a National Certificate in Electronics, followed by a Higher Certificate in the same subject.

With these qualifications under his belt, Sam went on to complete a degree in Electrical Engineering, eventually being awarded a First Class Honours after four years study on day-release. Now, Sam is looking to continue with his education and to study for a Masters in Engineering and Business.

“I was frustrated with my own experience as an A-level student, so I left education and began working on building site as an electrician,” said the 27-year-old.

“Then I spotted the opportunity with the apprenticeship scheme at the University of Manchester – and it has been the best decision because it has helped me on the path to reach my potential. I now hope I’m helping other students achieve their full potential.”