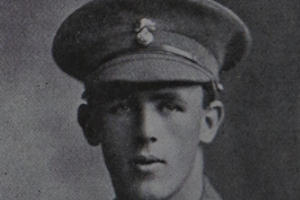 Today (Thursday, 28 January) marks the 100th anniversary of the death Siegfried Wedgwood Herford, a former engineering student who was described “the greatest rock climber England has yet produced” and “the truest, kindest, and most generous of friends, our idol and our pride”.

Siegfried is one of the people linked to the University, who lost their lives in World War I and is commemorated on our online Roll of Honour.

A private in the 24th Battlaion Royal Fusiliers, he was killed in action aged 24 and buried in Brown’s Road Military Cemetery, Festubert, France.

In a letter to Siegfried’s parents, Professor Charles Harold Herford, Professor of English Literature at Victoria Univesrity 1901 – 1921, and Marie Catherine Herford, one correspondent wrote: “Among us all he was not only very popular, but respected too, and we all feel his loss sorely.

“On the march he never tired, and on innumerable occasions, at the end of a trying march, Herford was to be seen cheerfully striding along carrying another man’s rifle in addition to his own.

“On our first visit to the trenches I sprained my ankle rather badly, and though we were in the open and under fire, it was your splendid son who not only took my equipment, but gave me a shoulder to the field dressing station.”

Siegfried’s climbing friend Geoffrey Winthorp Young, a correspondant of the “Daily News”, wrote his obituary, proclaiming him to be “the greatest rock climber England has yet produced” who was also “the truest, kindest, and most generous of friends, our idol and our pride” and Young confessed “much of my own joy in the hills has died with him”.

He is commemorated on University of Manchester War Memorial in the Main Quadrangle, Rock and Fell Climbing WWI War Memorial at Great Gable Summit and the Memorial Window at the Outward Bound Centre in Eskdale.

To read his full story, and those of others, visit: