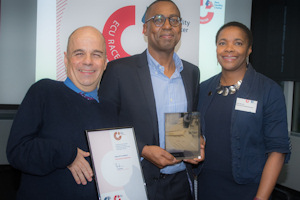 Patrick Johnson, Head of Equality and Diversity, received Manchester's award at the launch of the Race Equality Charter (REC) in London on 20 January from Professor Laura Serrant, Patron of the REC. The REC, developed and run by the Equality Challenge Unit (ECU), aims to improve the representation, progression and success of minority ethnic staff and students within higher education.

The charter is supported by race equality experts, a number of prominent UK academics and by Jo Johnson MP, Universities and Science Minister, as a step towards the government’s target to increase BME participation in higher education.

Universities commit to the charter’s guiding principles which include acknowledging the complexity and often covert nature of racial inequalities, and addressing institutional and cultural barriers faced by staff and students.

The need for the charter is manifest. There is a huge disparity in the representation and success of Black and minority ethnic staff within UK universities. For example out of 14,315 professors, just 70 are Black. For students, there is a degree attainment gap of 15.2% between BME students who achieve a first or 2:1 and white students. This rises to a 25.2% gap for Black African heritage students.

Jo Johnson MP, Universities and Science Minister, has lent his support to the aims of the Charter: “These awards recognise the hard work of many universities to improve diversity on campus. This Government is committed to ensuring everybody has the opportunity to benefit from higher education, and want to see 20% more BME students entering HE by 2020. The Race Equality Charter is a welcome step towards helping meet that common goal.”

The other seven trial award winners (at bronze level) are:

Professor Aneez Esmail, Professor of General Practice at Manchester, is one of five REC patrons appointed to assist the ECU. Patrons are experts in their own fields, as well as being tireless in their commitment to eradicating racial inequalities from their sector. They understand higher education, and are committed to ensuring the UK sector remains world class through its relevance to and representation of our 21st century society.

Professor Esmail said: "I think we have a real problem in our universities. Despite increasing numbers of black and ethnic minority (BME) students, the senior leadership of these institutions is overwhelmingly white and male.

"We must be prepared to tackle the deep structural problems that prevent the talent that is represented in the large number of BME staff working in our universities from realising their potential.

"Achieving a more diverse leadership will strengthen our institutions and encouraging universities to engage with the Race Equality Charter will help us in achieving this objective."