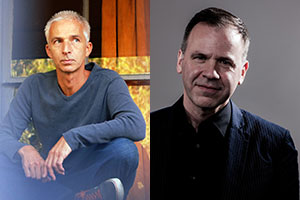 This event is the launch of his second novel The North Water, an historical novel set amidst the nineteenth-century arctic whaling industry. The North Water has been described by Booker Prize winner Hilary Mantel as ‘Brilliant. A fast-paced, gripping story set in a world where 'why?' is not a question and murder happens on a whim; but where a faint ray of grace and hope lights up the landscape of salt and blood and ice. A tour de force of narrative tension and a masterful reconstruction of a lost world'.

Ian McGuire will be joined in this event by Rupert Thomson, who is the author of ten critically acclaimed novels, including The Insult, which was shortlisted for the Guardian Fiction Prize and chosen by David Bowie as one of his Top 100 Must-Read books of all time, and Death of a Murderer, which was shortlisted for the Costa Prize. His memoir, This Party’s Got to Stop, won the Writers’ Guild Non Fiction Book of the Year. His most recent novel, Katherine Carlyle, was published in November 2015.