Nominations are invited for the brand new Pickstone Prize, which is named in honour of Professor John Pickstone (1944-2014), the world-renowned science historian and advocate of Manchester’s heritage 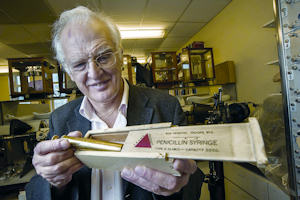 As well as founding Manchester University’s Centre for the History of Science, Technology and Medicine (CHSTM), John also initiated the Manchester Histories Festival in 2009.

The prize will recognise an individual who is championing and helping to preserve the histories and heritage of a community, area or site. It is a new addition to the Manchester Community Histories Awards, which open at 10am on Friday, 30 October 2015.

The awards give public recognition to the excellent work that is being done to celebrate and preserve Greater Manchester’s histories and heritage, and MH the charity who are responsible for delivering the Manchester Histories Festival is now calling for applications for three awards.

The deadline for applications is 5pm on Friday, 29 January 2016. Winning entries will be selected by a panel of judges ahead of the Awards Ceremony to be held in Manchester Town Hall on Friday, 11 March 2016.

Claire Turner, MH’s Chief Executive, said: “The Community Histories Awards provide the opportunity to recognise examples of the great partnerships and shared learning about histories and heritage in Greater Manchester. The heritage that is important to communities is often overlooked and the Awards work towards championing and acknowledging those stories that are important to the people of Greater Manchester. Our new Pickstone Prize remembers the wonderful work done by our founder, John Pickstone, who supported and championed many local histories and heritage projects.”