More than 800 people have set a new Guinness World Record today (16 October) at a University of Manchester-organised CPR relay, in aid of European Restart a Heart Day. 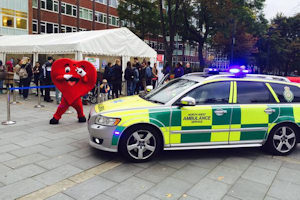 One person suffers a cardiac arrest every six minutes in the UK and 12 young people die every week from undiagnosed cardiac conditions, so the attempt, which is in support of European Restart a Heart Day, sought to train a minimum of 701 people in this vital technique – breaking a previous record of 700 set by the American Heart Association.

Training to save a life only takes 15 minutes and each volunteer who took part performed chest compressions for one minute before the next person took over.  Even a five second delay between the transfer between people would have resulted in the record being invalid, so organisation was key to the success of the attempt.

Patricia said: “A huge thanks to our volunteers and the people of Manchester who took part in the attempt today. Mainly though this is about getting the message out that learning this skill only takes a few minutes and thanks to this event we’ve now got over 700 people who can perform CPR in an emergency.”

The moment the record was officially announced:

Dr Andy Lockey, Honorary President of Resuscitation Council (UK), was at the event.  He said: “We want as many people to know CPR as possible, so Manchester is now a fantastic place to be because if you collapse there are an extra 700 people who know what to do.”

The University of Manchester has a strong commitment to supporting resuscitation through the deployment of defibrillators across campus and training initiatives including a student volunteering project.

Student, Rob Turton took part.  He said: “I really wanted to take part in the world record attempt but it’s really important that people know CPR – it’s such a good thing to know.”