Our home for graphene collaboration has been honoured at British Construction Industry Awards. 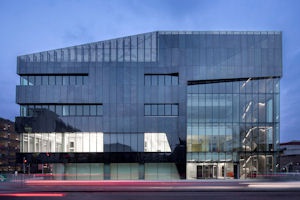 The recently opened National Graphene Institute (NGI) has been crowned Major Building Project of the Year at the annual British Construction Industry Awards.

The uniquely designed institute is fundamentally important to continue the world-class graphene research started in Manchester. Our researchers and scientists will be able to collaborate with colleagues from other universities and from some of the world' leading companies, to accelerate the commercialisation of graphene applications.

The British Construction Industry Awards award outstanding achievement in the construction of buildings, taking into account architectural and engineering design, as well as considering the details of the construction process.

The NGI held off strong competition from six other shortlisted schemes including the Weston Library for Oxford University, Five Pancras Square at Kings Cross and the Brooks Building for Manchester Metropolitan University.

The building also won the BIM (Building Information Modelling) Application Award for the extensive use of modelling software required to map out the NGI's extensive mechanical and engineering services.

The NGI was delivered by the University’s Directorate of Estates and Facilities, designed by architects Jestico + Whiles and built by BAM Construction.

Speaking at the NGI official opening in March, President and Vice-Chancellor Professor Dame Nancy Rothwell said: “This state-of-the-art institute is an incredible asset, not only to this University and to Manchester but also to the UK. The National Graphene Institute is fundamental to continuing the world-class graphene research which was started in Manchester.”