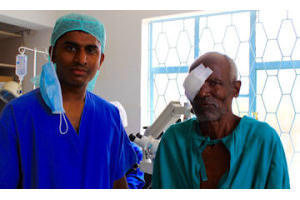 One of our medical students has combined the demands of his studies with setting up a charity that has equipped an eye clinic in Tanzania.

Rathaven Gunaratnarajah began the process of registering his charity ‘The Little Things’ in 2013 after a trip to Arusha, Tanzania saw him volunteering in a hospital, which provided minimal eye care for a region of more than 1.2 million people.

Shocked by the number of people he saw with treatable diseases, he raised more than £35,000 for his charity and then sourced and supervised the installation of equipment in the facility.

He said: “I was shocked by the number of people with eye diseases – whose lives were being ruined unnecessarily.  I came back determined to do something about this problem and establishing my own charity, which could work closely with local experts, seemed like the most effective way to do this.”

Rathaven, who is from Ilford in London, set about the painstaking process of registering with the Charity Commission and recruited student volunteers across the UK who took part in fundraising mountain treks, skydives and other activities.  It took just over one year to raise the funds, after which Rathaven set about sourcing the necessary equipment directly from global suppliers to make the money stretch further.

He said: “Setting up the charity was the hardest part but once we were registered, the enthusiasm was unbelievable. The eye clinic in Tanzania is now regularly treating patients, who within half an hour of surgery are able to see for the first time in years.

“It really does change these peoples’ lives.”

The next step for The Little Things is even more ambitious, with four fundraising projects in Sri Lanka, which total over £300,000.  Rathaven and his team will be raising funds to install the first MRI scanner in the country’s northern province, equip a premature baby clinic, equip a primary healthcare centre and also a hospital.

Rathaven said: “I have family ties to this region of Sri Lanka; so I know first-hand how the health services struggle there.  One of the hospitals we’re working with sees 250 -300 patients a day and for staff they have only two doctors and one previously retired nurse.

“We can’t provide ongoing funding for staff, but modern equipment will allow things to run more efficiently and help to deliver a better standard of care. Crucially, we decide which equipment is needed by working together with the local authorities."

Rathaven balances The Little Things alongside his studies as a medical student, and plays an active role within the University, as he is also Vice-Chairman of the Cardiovascular Society, Year Rep for ‘Friends of Medecins Sans Frontieres’ and Media Rep  for the Ophthalmology Society. He is now in his second year, having passed his first year with a distinction. Following his experiences with the charity, he is setting his sights on ophthalmology as a specialism.

“My family were concerned when I told them I was starting a charity at the same time as starting my medical degree,” he added.  “But my friends and family have been incredibly supportive and they are the unsung heroes of The Little Things!”

For more information or to donate, visit: