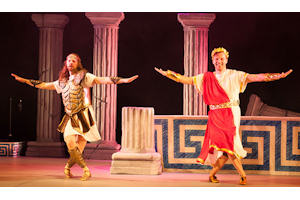 He can wrestle a ferocious lion, slay a mythical monster, muck out the world’s stinkiest stable…and he’s good with kids too!

From the critically acclaimed New Art Club comes Hercules, a new family friendly take on one of the classic tales of Greek mythology which comes to Contact on Thursday 29 October.

New Art Club are Pete Shenton and Tom Roden, often described as the Morecambe and Wise of dance, renowned for creating unique work that brings together the worlds of dance and comedy.

Now they bring their unique comic style and sense of the absurd to the story of the 12 labours of Hercules in a hilarious and outrageous family friendly show that’s ideal entertainment for children of all ages.

There’s dancing, there’s singing, there’s hula hooping and audience participation as well as some magical surprises as the story of Hercules unfolds in a crazy twist on the classics that encourages children to join the original superhero on his epic quest.

The show is co-produced in partnership by Dance4, New Art Club and Nottingham Playhouse and comes to Contact as part of a national tour.

The show also features specially selected community performers recruited and rehearsed for every venue in each town and city to recreate three of the 12 Herculean labours alongside New Art Club and the professional cast.

For a sneak preview, visit: