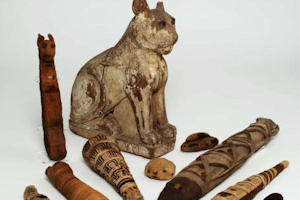 This new exhibition will explore ancient Egyptian animal mummies, prepared in their millions as votive offerings to the gods. By breaking down many common preconceptions, this unique ancient practice will be given fresh interpretation. Gifts for the Gods will explain this complex religious practice by examining life and the environment in ancient Egypt. The British fascination with ancient Egypt will be explored, including the discovery of animal mummies by excavators, their purchase by collectors, how the mummies came to be in the UK, how modern science is being used in Manchester to study these ancient artefacts and how they can be protected for the future. Over 60 mummified specimens such as jackals, crocodiles, cats and birds will be displayed alongside cultural artefacts including stone sculpture and bronze statuettes, fantastical 19th Century works of art and never-seen-before archives.

Visitors will travel back in time to 750BC when the Egyptian landscape was far removed from the arid desert we see today, but a country of lush grassland, with taxidermy specimens showing what the animals would have looked like when alive. Egypt’s many gods could take animal forms to express their superhuman nature. The exhibition explores how images of animals – pictures, statuettes or mummies – could be used to communicate with the gods. Animal mummies and bronzes statuettes are the most common votive offerings – gifts to the gods.

A recreation of a subterranean animal catacomb will create an immersive and atmospheric experience for the visitor with a dimly lit, narrow corridor lined with pots containing votive animal mummies, centred around a focal point for worship.

19th Century paintings show how animals were ‘worshipped’ by the ancient Egyptians and portray the British fascination with a ‘romantic’ concept of ancient Egypt. Intrigued by the mysteries of the animal mummies, alongside the pyramids of Giza, one of the main tourist attractions in Egypt during the 18th and 19th centuries was the ‘Tombs of the Birds’. This catacomb at the site of Saqqara, was subsequently lost and was only re-identified in the 1960s by a British team. Saqqara continues to be excavated by British archaeologists today representing continuity in British involvement with this important site.

Photographs, archive material and travel journals will show how the animal mummies were excavated and selected by archaeologists and museum experts, including how they were collected and distributed as curios and souvenirs. The study of animal mummies is a relatively new field of research, and more recent excavations are featured, in particular at Saqqara.

A section on the scientific study of animal mummies highlights the importance of The University of Manchester’s groundbreaking research in this area, supported by 54 British museums. Using wrapped, partially wrapped and unwrapped animal mummies from a variety of UK collections, the exhibition will look at the use of imaging (photography, radiography, CT, light microscopy) to gain further insights into the subject.

The Ancient Egyptian Animal Bio Bank Project based at the University of Manchester, and conducted by Dr. Stephanie Atherton-Woolham and Dr Lidija McKnight aims to catalogue consistent data from animal mummies in museum collections outside Egypt. Currently, this includes over 800 individual animal mummies from collections in Britain, Europe and the United States.

The exhibition will open at Manchester Museum, The University of Manchester (8 October 2015-17 April 2016) before being displayed at Kelvingrove Art Gallery and Museum, Glasgow (May-September 2016) and World Museum, Liverpool (October 2016-March 2017).

Dr Lidija McKnight, Research Associate, the Ancient Egyptian Bio Bank Project, The University of Manchester said, “This exhibition will showcase the role played by the British in the discovery, excavation, collection, curation and scientific research of this understudied subject. The University of Manchester, with its long history in Egyptian mummy research, is leading the field; helping to shed light on the material remains of this ancient practice and, hopefully, to reveal more about how and why these animal mummies were produced.”

Dr Campbell Price, Curator of Egypt and Sudan, Manchester Museum said, “We are excited as this is the first exhibition on animal mummies to be held in the UK, and offers the chance to reunite mummified material from different archaeological sites for the first time in over a century. It will feature over 60 mummies, including many never before seen on public display. We are extremely pleased to be able to tour this Manchester-based exhibition to partner institutions. We expect the exhibition to be very popular at Manchester Museum, and look forward to enabling more visitors to share in this exciting subject.”