High five as Alex beats his record by more than five hours and raises more than £5,000 for charity 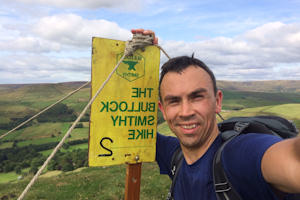 University colleague Alex Waddington was cold, hungry and aching by the time he limped into Hazel Grove in the early hours of Sunday morning.

But he still managed a smile, knowing he had completed the gruelling Bullock Smithy Hike over five hours quicker than last year and had raised over £5,000 for charity.

After saying he’d never do it again, Alex Waddington took on the 56-mile route – this time packing his trainers and running some of the course.

Last year Alex took on the challenge around the Peak District - which involves 7,000ft of ascent - in memory of his father, finishing in 21 hours 50 minutes.

Thanks to the generosity of friends, family, colleagues and strangers, he raised a whopping £4,700 for Macmillan Cancer Support and Strathcarron Hospice near Stirling, which both provided support to his dad before he died in January 2014.

This year he challenged himself to go back and complete the course in under 20 hours – and was amazed to clock a time of 16 hours 43 minutes.

The Bullock Smithy involves travelling through the night over rough and challenging terrain. It starts in Hazel Grove in Stockport and goes out through Lyme Park and into the Peak District, before circling through remote areas south of Buxton and back through Cheshire to the starting point.

Walkers and runners must beat fatigue, blisters, negotiate relentless knee-jarring climbs and descents - and run the gauntlet of cow fields and dogs on remote farms.

Alex, who works for policy@manchester, said: “Yet again, I’ve been humbled by the generous support I have received. I was lucky in that the conditions were good, and I felt strong most of the way. I did suffer towards the end, and at one stage lost some time due to poor navigation, but I was a stunned to finish in the time I did.”

“Walking down stairs is still a problem for me, and I think I’m going to lose a couple of toenails, but that’s a small price to pay for raising such an amazing amount for two brilliant charities.

“I’d like to give particular thanks to the Run Commute group at the University who not provided words of advice and support, but also kind sponsorship. It was a big boost.”

For more information or to donate, visit: