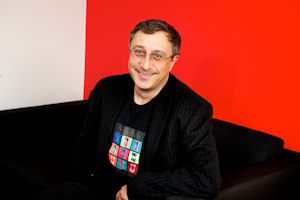 Professor Falko is one of the UK’s leading condensed matter theorists, who has made substantial contributions towards the understanding of electronic and optical properties of graphene, including the discovery of bilayer graphene.

He will join the University on 1st October 2015 and will be responsible for developing the research strategy for the NGI.

Professor Falko began his career by studying for his PhD at the Institute for Solid State Physics RAS, and gained postdoctoral experience at Max-Planck-Institut in Stuttgart and Oxford University,   followed by 20 years of service at Lancaster University where he was Distinguished Professor and Head of Theory Division.

A fellow of the Institute of Physics, he has previously held an ERC Advanced Investigator Grant and in 2010 won the prestigious Royal Society Wolfson Foundation Research Merit Award.

He has played a pivotal role in shaping the European research community in graphene and other two-dimensional materials, establishing the ‘Graphene Week’ conference series and leading the European Graphene Flagship work package: ‘Fundamental Science of Graphene and 2D Materials Beyond Graphene’.

He is also Co-Director for the Graphene NOWNANO Centre for Doctoral Training programme, based at The University of Manchester.

Professor Falko will work alongside the Director of Operations and the Business Director, to lead and co-ordinate the research activity within the NGI as well as contributing to the strategic management and operational priorities of the Institute and to provide an integral link between academic staff and companies to support industrial projects.

The University of Manchester has more than 230 researchers in graphene and 2D materials, led by Nobel laureates Sir Andre Geim and Sir Kostya Novoselov. The appointment of another world-class graphene academic, who has collaborated with the Nobel laureates for the recent decade, reinforces the University as the leading institution for graphene research in the world.

Professor Falko said: ‘I am looking forward to working in the outstanding intellectual environment of The University of Manchester, where the research facilities of the NGI will form the platform for interdisciplinary collaborations between academics and for engagement with industry.

“Science and technology of two-dimensional materials and their heterostructures, which will be the focus of the NGI, is a fast-growing fertile field of research which offers both surprising scientific discoveries and prospects for immediate applications.

“The role of NGI, as a research platform, will be to help my colleagues at Manchester, across the UK and from 150 partners of the European Graphene Flagship to shorten the path from exciting ideas to their practical realisations and delivery of new technologies to the UK/EU high-technology industry sector. “

Professor Stephen Watts, Head of School of Physics and Astronomy: “I am delighted that we have appointed a scientist of Professor Falko’s quality and reputation to direct the research programme here at the NGI.

“Professor Falko’s expertise will be paramount in helping us to realise graphene’s full potential. The University of Manchester has an unrivalled knowledge and expertise in graphene and other 2-D material research, I am confident that under Professor Falko’s direction our key knowledge base will continue to grow and through appropriate partnerships and collaborations, can be a model for graphene commercialisation over the next 20 years.”