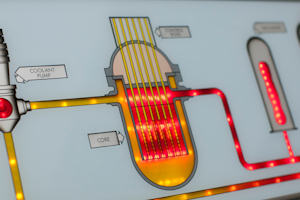 Presented by nuclear physicist Jim Al-Khalili, the one-hour primetime documentary explored the history and the science behind Sellafield.

The BBC cameras were granted access by Sellafield Ltd into some of the country’s most secure buildings, aiming to increase public understanding of the site, its challenges and its clean up. Jim Al-Khalili and the camera crew spent a month in West Cumbria filming the programme.

During both planning and filming, University staff were instrumental in advising the programme makers and in running experiments for the cameras, allowing them to demonstrate some aspects of the work carried out at DCF, as well as showcasing its state-of-the-art equipment.

The DCF Ion Beam Accelerator was used to irradiate a glass microscope slide with a high energy proton beam.

Experimental Officer, Dr Andy Smith, who arranged the experiment, said: “A side product of irradiation with protons was to transmute a small amount of the stable oxygen in the glass into an unstable isotope of nitrogen. This has a decay half life of ten minutes which was ideal for Jim Al-Khalili to demonstrate the principles of radioactive decay by using a portable monitor to demonstrate how over a half-hour period (three half lives) the activity level in the sample would decay to an eighth of its original level.

“The DCF accelerator complex and portable radiation detection equipment was also used by the presenter to demonstrate the different properties and consequent impact on shielding requirements from the three main types of radiation - alpha, beta and gamma radiation.”

Experimental Officer, Dr Ruth Edge, and Knowledge Exchange Post-Doctoral Researcher, Dr Laura Leay, helped demonstrate the damage caused by gamma radiation to living plants. They spent several days exposing plants to gamma irradiation inside the DCF Cobalt-60 gamma irradiation chamber for the documentary. A variety of plants were tested, including tomatoes, peppers and marigolds, as well as the begonias that were eventually used in the TV programme.